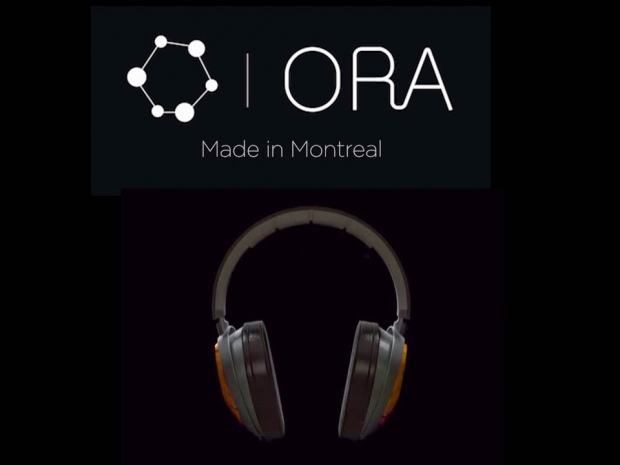 Earlier this year at CES, we met with the folks at Montreal-based startup ORA who are hard at work on developing the world's first graphene based headphones.

The company has now taken its idea public with the recent launch of a Kickstarter page to promote its fundraising efforts and make its first flagship product available to early supported at unprecedented low prices.

ORA prizes itself on being one of the first to create a commercially viable application of the nanomaterial in a package that brings some notable achievements, including unparalleled frequency responses, wider localization cues, and higher volume improvements to the personal HiFi audio industry. For the past thirteen years since its discovery in an isolated lab environment, industrial interest for using graphene in commercial products has been shunned because of the high costs required to mold it into desired shapes. Thankfully, ORA discovered two suppliers who have been willing to place speculative bets on a very optimistic future for this advanced nanomaterial, saying they will offer it at relatively low unit costs. For music lovers, the company is now preparing to take orders for its GQ Headphones, the very first to feature lighter membranes, lower distortion, an improved thermal profile, and a significant increase in wireless battery life over the nearest competition.

The company launched its Kickstarter page for the GQ Headphones on June 20th and has already gathered over $391,000 in funding from 1,480 backers in just over two weeks, surpassing its rather modest goal of $104,355 by 375 percent. With funding safely squared away for the world's first graphene headphones, ORA is still offering an "Early Bird" package for $359 CAD ($272) which includes the GQ Headphones for 46 percent off suggested retail price. The company is also offering a limited group of backers two pairs of GQ Headphones for 50 percent off retail price, and for $999 it will give you its flagship product signed by Gustavo Dudamel, director of the Venezuelan Orquesta Sinfónica Simón Bolívar and the Los Angeles Philharmonic.

ORA currently has a scheduled delivery date of March 2018 for its Kickstarter backers, which has been pushed back from the original ETA before the end of the year. With a suggested retail price of $999, early backers can effectively receive a promising HiFi audio product using an advanced nanomaterial for half price while leaving a smaller carbon footprint in the process. We expect these will sell out quickly and look forward to posting an in-depth review of the GQ Headphones for our readers when the final product is ready to come out of the labs.

Last modified on 06 July 2017
Rate this item
(0 votes)
Tagged under
More in this category: « AMD appoints former Intel man to board Bixby can’t learn English »
back to top