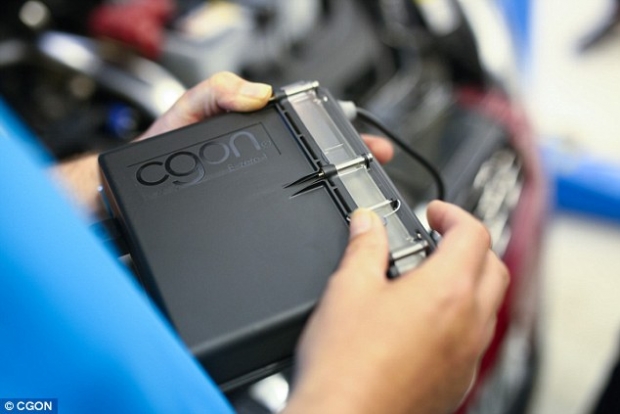 A Royal Navy sailor who served on nuclear ‘Hunter Killer’ submarines has developed a fuel cell in his garage which could be the answer that the car industry has been looking for – at least for older petrol driven motors.

He has created a compact hydrogen fuel-cell box reduces car emissions by up to 80 per cent and offers fuel savings of up to 20 per cent, according to independent tests.

His box fits neatly into a car’s engine bay and uses electrolysis to generate on-board hydrogen. This is pumped immediately and directly into the engine to make the petrol or diesel fuel burn faster, cleaner, and more completely.

Sheard sought professional help from industry and finance from crowd-funding to found his company called CGON, which now manufactures his ‘green’ box in the UK.

Nuclear submarines, which use industrial scale electrolysis to break down water (H2O) to create oxygen - to allow crews to breath while staying underwater for weeks at a time - with hydrogen as a by product.

Inside the box are two special titanium-coated electrodes - a cathode (negative) and anode (positive) – which pass electric current through an electrolyte solution, causing hydrogen gas to split off.

The hydrogen is ‘sucked’ into the engine’s combustion chamber along with the conventional fuel-air mixture. This creates a faster, more complete and ‘cooler’ burn that eliminates almost all waste gases, gives better fuel economy, and ‘drastically reduces’ harmful emissions including Carbon Dioxide, Carbon Monoxide, NOX, Hydrocarbons and particulates.
80 per cent reduction in overall emissions and about 20 per cent reduction in fuel consumption. It also keeps diesel particulate filters clean.

The system works with any petrol, diesel, or LPG internal-combustion engine including cars, taxis, forklifts and HGV trucks, and is on trial with car-maker Morgan.

The flagship consumer version for motorists – called ‘ezero1’- costs £459 (including VAT and fitting), can be fitted to any internal combustion-engined car in about an hour, and comes with a 12-month guarantee.

It was independently tested by experts at Emissions Analytics whose ‘real world’ performance tests use a portable device, which measures emissions coming out of the exhaust pipe while cars are driven. For urban driving, the testing showed reductions of 91.3 per cent in particulates or ‘soot’, and a halving of nitrous oxides (47.9 per cent reduction in NOx and a 50.6 per cent reduction in NO2).

The box is topped up every 6,000 miles using the firm’s patented electrolyte solution costing £5 for a 250ml pouch.

Experts said consumers should tread carefully and check that their insurance and warranties are not invalidated by fitting such hydrogen fuel additive devices.

Last modified on 25 August 2017
Rate this item
(0 votes)
Tagged under
More in this category: « Apple’s on-again off-again self-driving project is really off CIA was spying on intel partners »
back to top