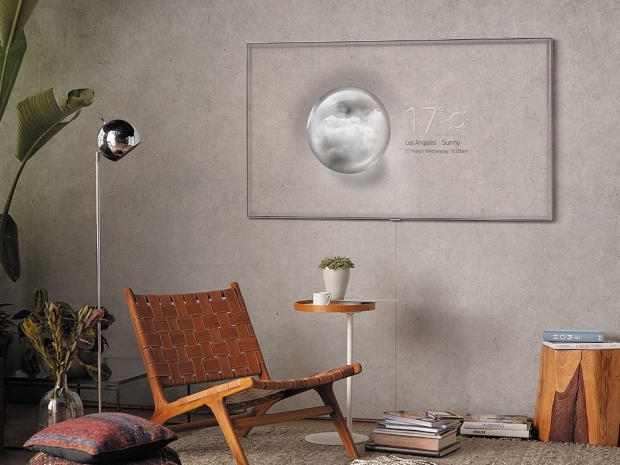 Ambient mode makes it disappear when switched off

Samsung's new QLED line of 4K TVs features a technology the company is calling "Ambient Mode" which runs a picture of what is behind the TV when it is switched off.

The result is something that looks like a floating black rectangle mounted on a wall. Samsung even includes a digital version of the shadow this black rectangle would cast on the wall, as if there really wasn't a large LED panel sitting in the middle of the thin metal strips.

There are five QLED models, with minor tweaks between them, ranging in size from 49 inches, up to an absolutely massive 88 inches. The televisions have a built in timer so that the ambient setting will turn off after a while, in order to spare your electricity bill, so it is fairly pointless.

Viewing the televisions before Samsung's event, the ambient really did appear to blend them into the walls at first blush. One, against a fake brick wall, was indistinguishable from what was behind it until you really got close up to the screen.

The mode is just intended to give the illusion of invisibility between watching TV, and when you want to show off your new television to a visitor.  Because apparently that happens a lot.

Pricing isn't available but you can expect them to range from a few thousands dollars all the way up to $20,000 for the largest, sharpest models.

Samsung also announced that it's partnering with The Weather Channel, The New York Times, and others to overlay content on the ambient TVs. They will also be able to control any smart device that can control to Samsung's SmartThings system, like Amazon Echoes, Ring doorbells, and Philips Hue Lights. Bixby is baked into the remote to help you search for content and cater to commands.

Last modified on 08 March 2018
Rate this item
(0 votes)
More in this category: « Trump wants to take away your drones Apple admits serious violations of its labour and environmental policies »
back to top