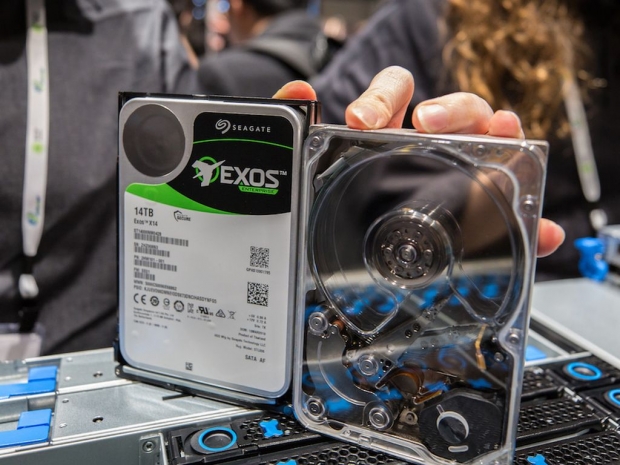 With new MACH.2 and HAMR technologies

Seagate has officially announced its newest Exos 14 HDD at the OCP summit, a helium filled 14TB HDD aimed at the enterprise market, which uses new MACH.2 Multi Actuator and HAMR technologies, allowing it to hit a record 480MB/s sustained throughput.

“MACH.2 Multi Actuator technology is an IOPS-per-Terabyte win for Seagate and for our cloud provider partners,” said Tony Glavis, Seagate marketing initiative manager for Enterprise applications, discussing the collaboration with Microsoft. “Our purpose is to accelerate technology innovation for performance in the cost-sensitive storage tier — and MACH.2 does that by solving response time for the end user and enabling our cloud partners to attain SLA requirements. Continued advances in capacity with HAMR and increased IOPS with MACH.2 work together to improved cost efficiencies while sustaining performance.”

In addition to the MACH.2 technology, the Exos X14 will also feature Seagate's new HAMR (Heat-Assisted Magnetic Recording) technology with read/write heads that have achieved impressive reliability results, surpassing requirements by a factor of 20.

“On any hard drive meeting the industry specification, if all heads on the drive were writing 100 percent of the time in the field — which, of course, they do not — that would mean each head had written 152TB per head in total,” explained Jason Feist, Seagate’s director of Enterprise Product Planning. “Or to put it into Petabytes: the customer requirement is that a single head can write 0.152 Petabytes; we’re already writing 3.2 Petabytes on a single HAMR head.”

Unfortunately, we do not know if similar technologies will eventually get to consumer HDDs, but as far as Exos X14 is concerned, Seagate notes that these are currently sampling to select customers with production availability expected this summer.