Ecuador will not act for Assange any more 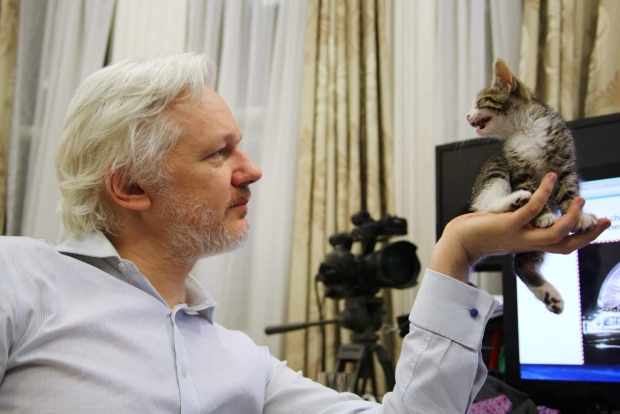 Ecuador has had enough of Julian Assange and said it will no longer speak to the British government on his behalf.

For those who came in late, Assange jumped bail to avoid answering questions on two sexual assault cases in Sweden and managed to find asylum in Ecuador’s embassy.

Now he is suing Ecuador demanding that the staff do his laundry, pay his medical bills and clean up after his cat.

Foreign Minister José Valencia said in an interview with Reuters that Ecuador’s only responsibility was looking after Assange’s wellbeing.

“Ecuador has no responsibility to take any further steps. We are not Mr. Assange’s lawyers, nor are we representatives of the British government. This is a matter to be resolved between Assange and Great Britain.”

Assange’s lawyer Greg Barns claims that Australia’s government should intervene to assist “one of its citizens who faces real danger”.

The change in position marks a departure from Ecuador’s previous practice of maintaining dialogue with British authorities over Assange’s situation since granting him asylum in 2012.

Assange fears he could be arrested and eventually extradited to the United States if he leaves the embassy.

Valencia said he was “frustrated” by Assange’s decision to file suit in an Ecuadorean court last week over new terms of his asylum, which required him to pay for medical bills and telephone calls and to clean up after his pet cat.

“There is no obligation in international agreements for Ecuador to pay for things like Mr. Assange’s laundry”, he said.

Ecuadorean President Lenin Moreno has said that asylum is not meant to be eternal, but he has expressed concern about the possibility that Assange may be extradited to the United States. Valencia said on Tuesday that he has not discussed Assange’s situation with the United States government.

Last December, Ecuador granted Assange Ecuadorean citizenship and tried to name him as a member of the country’s diplomatic mission in Britain and Russia, which could have assured him safe passage to leave the embassy. Britain said no.

Last modified on 24 October 2018
Rate this item
(0 votes)
Tagged under
More in this category: « Linus Torvalds is back in charge Russians behind cyber-attack on Saudi petrochemical plant »
back to top