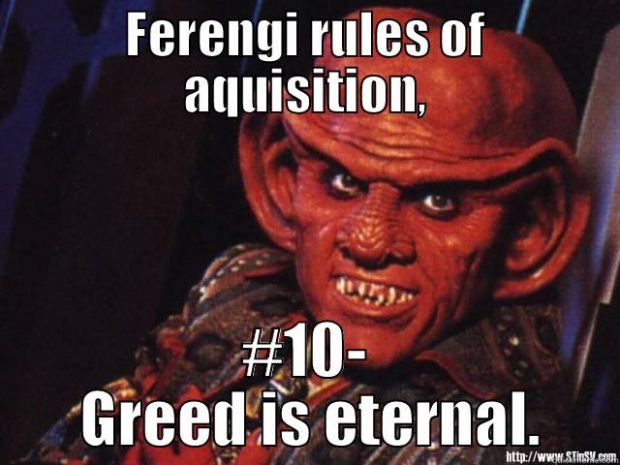 The fruity cargo cult Apple found itself facing a move from Conservative shareholders to purge liberals from its board so that it could abandon its green policies to make even more money for shareholders.

The National Centre for Public Policy Research which is famous for backing climate denying bodies wanted the company to show the “ideological perspective” of nominees for its board of directors. We guess this means that it wanted to know the politics of board members so that shareholders could purge liberals from the board.

Arguments were made both in favour of the proposal and against it in the Steve Jobs Theatre, where the meeting is being held.

It was vetoed by a wide margin.

The Centre has tried before to turn Apple more right wing.

In February 2014 it put forward a proposal to force Apple to "disclose the costs of its sustainability programmes." The idea was that its green policies were bad for business. It wanted Apple to save money by polluting the planet so that shareholders could make more money.

That was rejected by a 97 per cent vote. CEO Tim Cook "categorically rejected the worldview behind the NCPPR's advocacy". He said that there are many things Apple does because they are right and just and that a return on investment (ROI) was not the primary consideration on such issues.

"When we work on making our devices accessible by the blind, I don't consider the bloody ROI... If you want me to do things only for ROI reasons, you should get out of this stock."

This motion was equally bizarre.

Meanwhile, Apple CEO Tim Cook begged shareholders not to give up on the company. Apple has been accused of lacking any ideas or new products and was just jacking up prices to cover the lack of innovation.

However, Cook said that Apple is "rolling the dice" on some future products that will "blow you away".

Cook went on to say that Apple's eventual goal is to reduce the price of the 2018 Retina MacBook Air, which currently starts at $1,200. In reference to the Apple Watch and the AirPods, Cook said there's a "long, great roadmap" of "fantastic" products on the horizon.

Of course, he didn’t say what these products were or give any hints. But his promise was enough for the Tame Apple Press never to mention the issue ever again. Instead, it opted to replace the lack of information with extensive coverage of vapourware rumours.

Cook was equally general with its information about Apple services.

Later this month, Apple is expected to unveil two new products in the services category, including a new streaming TV service outfitted with original television shows and a new Apple News service with access to subscription news sites and magazines for a monthly fee.