More than half of US doesn’t have broadband 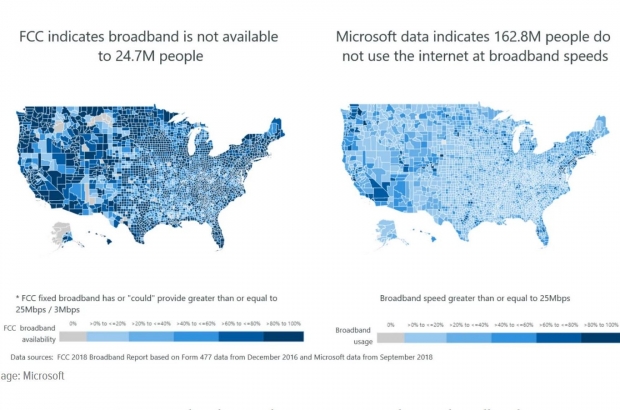 Despite claims by the subsidy collecting telcos

More than 162.8 million people—over half the population of the United States don’t use broadband internet according to figures worked out by Microsoft.

This figure is hugely different from FCC figures which suggest that just 25 million Americans are without access to broadband internet. This is even using its daft broadband definition of broadband being 25Mbps.

Part of the problem is the US’s super powerful ISPs which have been allowed to get away with absolute bollocks so that they don’t have to invest in providing any product. They are assisted by definitions of broadband and broadband supply that make American internet infrastructure look much more robust than it is.

It means that they can say they are supporting wide swathes of America without actually supporting it and claim major subsidies to provide it Microsoft claims the government has handed out over $22 billion in subsidies for this piss-poor service. It would have been easier for local councils and communities to build their own, but the telcos have a nasty habit of suing any council into oblivion if they upset their local monopolies.

The government plans about improving internet infrastructure is based on a series of maps that easily and clearly show the underserved regions of the country versus those doing just fine.

Microsoft said that these maps use some terrible data. To determine who does and does not have access, the government sends out questionnaires to the ISPs because they are hugely interested in giving accurate information.

Microsoft pointed to Ferry County in Washington. According to the most recent maps, 1100-percent of Ferry County residents have access to broadband. Microsoft claims that when it spoke to local government officials, they said this was simply not the case, and when Microsoft examined its data, gathered during its own rural internet initiative, it found just two percent of Ferry County residents were using broadband, either because they didn’t actually have access, or because it was simply too costly to pay for 25Mbps.

The maps are based on census blocks, a measurement unit used by the US Census Bureau. Just one person in that block needs to have broadband for it to count as adoption. That’s probably an accurate reflection of broadband access in a census block the size of a single city block, but census blocks can get big in rural areas. There’s one census block in Alaska that covers 8,500 square miles. Which means if one person in that block, which is eight times the size of Rhode Island, has broadband, then the map will show that the whole block has broadband.

Microsoft is concerned because it wants a better broadband adoption. It’s invested billions in its Azure cloud computing platform—which can’t really be used if people don’t have internet access. It’s also planning to release a new Xbox gaming platform in the coming year, and there are very credible rumors that this platform will heavily rely on streaming.

Of course, ,if Americans believe that the world is flat, that it was created in seven days, and Trump is a good president, then chances are they will believe anything the ISPs will tell them,

According to Gizmodo, Microsoft's maps are being looked at by a Senate sub-committee, but given they are reluctant to do anything to take on Trump’s FCC it is safe to assume that nothing will be done.

Last modified on 11 April 2019
Rate this item
(0 votes)
Tagged under
More in this category: « Assange claims he is going to be thrown out of the Embassy Assange finally arrested »
back to top