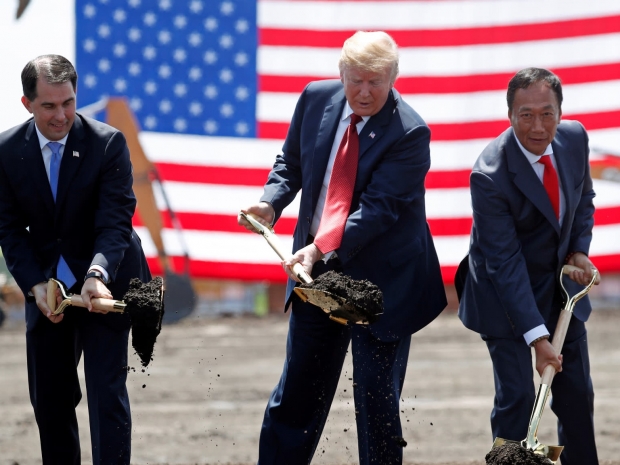 The Foxconn factory in Wisconsin will only create 1,500 jobs when it starts production next May, Governor Tony Evers announced.

That’s the same number Foxconn has been saying since it shifted plans for the factory a few months ago, and far short of the 13,000 jobs that were promised when President Trump broke ground a year ago (pictured).

Evers has been negotiating with Foxconn since he replaced former Wisconsin governor Scott Walker, and he says he now has “clarity” on Foxconn’s plans.

The 1,500 jobs are short of the 1,800 jobs required for Foxconn to get the next set of tax credits under its $4 billion deal with the state.

Foxconn already missed its first jobs target under that contract, hiring only 156 employees instead of the required 260 last year.

According to The Verge, Foxconn bought empty buildings for “innovation centres” around the state as part of a promised “AI 8K+5G ecosystem” (although it’s never specified what that ecosystem actually is).

Foxconn initially disputed The Verge’s reports of the buildings being empty, it has now been 89 days since the company promised a statement or correction regarding the plans for the innovation centres.

The sharp decline in the number of jobs is due to Foxconn cancelling the promised 20 million-square-foot Generation 10.5 LCD fab to produce 65-inch TVs, which was specified in the contract with Wisconsin.

It instead broke ground on a million square foot facility that the company claims will be a Generation 6 fab that produces smaller LCDs. That plant will also assemble servers and networking equipment, according to Foxconn, which might explain why display manufacturing experts have said that the construction plans submitted to the state do not appear to show a fab.

Last modified on 11 July 2019
Rate this item
(1 Vote)
Tagged under
More in this category: « US discovers its Chinese purge of security gear is impossible Libra goes retrograde with the US Federal Reserve »
back to top