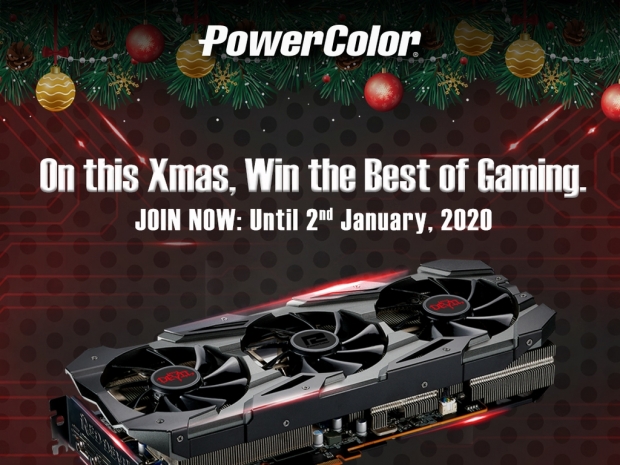 Powercolor is hosting a neat Christmas giveaway, where you can win some great prizes, and the company is even teasing some upcoming new graphics cards.

The Christmas giveaway from Powercolor is fairly simple and there are multiple ways to enter, from answering a neat question, following Powercolor on Twitter, tweeting or retweeting the giveaway and using proper hashtags, to even simply viewing the photo on Instagram.

While the main graphics card in the giveaway is the Radeon RX 5700 XT Red Devil, Powercolor is also teasing two unannounced cards, most likely the RX 5500 XT, and even possibly the rumored RX 5600 (XT). The question in the giveaway is rather interesting, asking if the teased two cards come with 4GB, 6GB, or 8GB of RAM, and while it is rumored that the RX 5500 XT will come in both 4GB and 8GB versions, there is also a big rumor that the RX 5600 (XT) could pack 6GB of VRAM, which suggest it could feature a 192-bit memory interface.

Such graphics card, if it exists, could even put pressure on Nvidia's GTX 1660 Ti. In any case, even if it exists, AMD is doing a good job in keeping it under wraps, and so far the only leak was from ECC listings spotted by Komachi and Videocardz.com, but hopefully, we will hear more about that one soon.

In any case, Powercolor has launched a dedicated site for its Christmas giveaway where you can score some entries quite easily.

Last modified on 11 December 2019
Rate this item
(0 votes)
Tagged under
More in this category: « Apple is no longer the world's largest public company Microsoft gets more agressive with Windows 7 users »
back to top