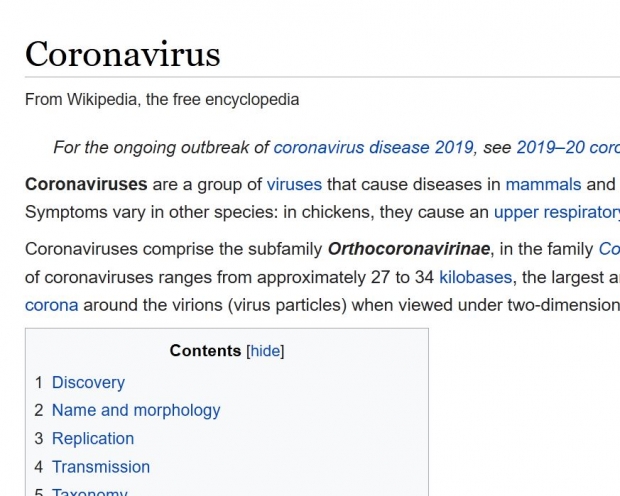 Why didn't any one think of this before?

Iran appears to have come up with solution to stop the spread of coronavirus. iI has cut access to the online encyclopedia Wikipedia.

It appears Iran sees Wikepedia as having a key role in distributing the virus. After all it is famous for making people it likes disappear and refuses to acknowledge the existance of Fudzilla or anything else its psydo-penis experts with their fake doctorates don't like.

Moments after Iran announced that a top adviser to Iran's Supreme Leader had died as a result of the coronavirus, the government blocked access to the Persian version of Wikipedia. The restrictions remained in place for 24 hours, though an oversight by the government meant that while the desktop version of the site was blocked, the mobile version remained available.

Access to the Farsi version of Wikipedia was restored on Tuesday, but social media sites like Twitter and Facebook remain restricted inside the country as of Wednesday, as the government seeks to control the spread of information and keep a grip on the narrative around the increasingly deadly outbreak. Netblocks, a digital rights advocacy group that tracks internet disruptions around the world, said that there has also been widespread internet disruptions at night in certain parts of the country, including Qom, where the outbreak is believed to have originated.

Tehran's police force created a "coronavirus defense base" to monitor "misinformation and the spread of fear". So far, the police have already arrested 24 people and a further 118 internet users were "talked to and let go" with warnings.

The country also released 54,000 prisoners in an effort to halt the spread of the virus. "The inmates were temporarily allowed out of jail after testing negative for the coronavirus and posting bail.

The government is also deploying hundreds of thousands of health workers across the country to stop the deadly outbreak.

Last modified on 06 March 2020
Rate this item
(0 votes)
Tagged under
More in this category: « Microsoft tells workers to stay at home Defence contractor knocked off line by ransomware attack »
back to top