Nuvia Phoenix CPU is faster than all its ARM X86 competition 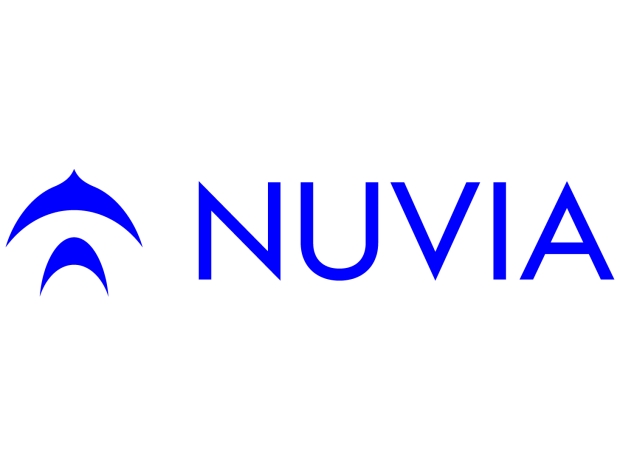 We have reported that a hot new chip startup founded by ex-Apple and ex-Google engineer rock stars, got funded in the first round of financing with $53 million. Now, Nuvia is ready to share some preliminary performance and power numbers. Both power and performance are beating every mobile and server CPU core that exists on the market.

Nuvia is building an ARM-based CPU core and server SoC from scratch, aiming for leadership in power, performance, and TCO. It takes time to finish up an actual project, but the blog written by Jon Bruno is giving the competition the benefit of the doubt and expects the competition to up the game in the next two years. According to projections, Nuvia will still win in power per core and performance.

Nuvia is targeting the Hyperscaler – server market, and it is safe to assume that there is a great interest in this project since the group of industry veterans managed to generate such a high sum in the round one financing. Names include ex-Apple SoC veteran Gerard Williams III as a CEO, John Bruno ex ATI, AMD, Google and, Manu Gulati of ex-Google. The marketing is led by Jon Carvill, a veteran that worked in many big chip companies including ATI, AMD, Intel, Qualcomm, GlobalFoundries as well as Facebook.

We can only imagine that the round two of financing will play out well, but again, a startup needs hundreds of millions to develop an SoC chip from scratch.

The demand for servers and hyperscalers just keeps getting higher as we generate more data, and even though the server market has tremendously changed over the last two decades, there is space for innovation. Most data centers are limited by compute capability of workload, AI, and I/O capabilities, power dissipation, as well as the power bill and physical space.

John Bruno shared his first data with the public in the recently posted blog that takes about an important metric called Performance per Total Cost of Ownership (TCO).

Nuvia is developing an SoC that will deliver industry-leading performance with the highest levels of efficiency. In order to do that, no stock ARM core will do the job or any existing X86 processor core from both AMD or Intel.

The company is building a CPU core codenamed Phoenix with a complete overhaul of the CPU pipeline. Nuvia describes Phoenix as a custom core based on the ARM architecture that will find its way to Orion SoC.

Smartly targeted comparison of X86 processors versus Qualcomm's Snapdragon S865 based on Art A77 7nm core tells a great story. It shows something that most of you know.  The ARM stock core inside of the Qualcomm chip shows excellent single tread performance with under 2W. Once the power increases to double digits, 14 nm Skylake, 10nm Sunny Cove, and 7nm Zen 2 perform only 40 to 50 percent faster but at 6x to 11x power of the ARM stock core. 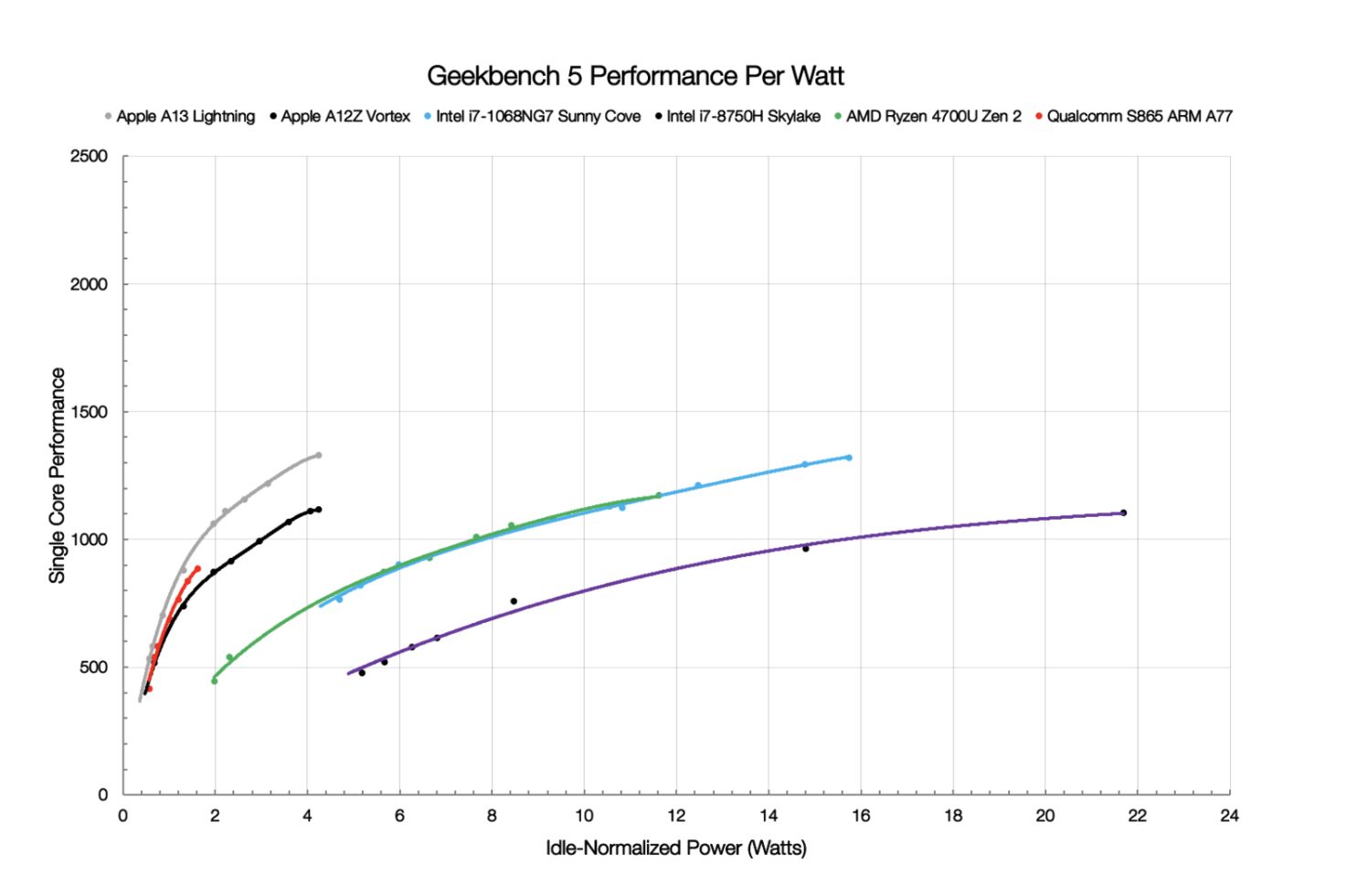 Adding Apple A13 and A12Z cores tell a story that making a custom CPU ARM core pays off. Apple scores close to a single-threaded performance of 10 nm Sunny Cove and wins against AMD's Zen 2 7nm and does it under 4W. Intel and AMD still need 15 to 25W to get that performance. Some might wonders why everyone doesn't simply do the ARM-based cores from scratch just as Apple did. The easy answer is that it is hard and expensive, and only a few engineers can actually pull it off.

At the same time, companies like Apple benefit as it controls the horizontal product and software stack, but a player such as Qualcomm needs to make a standard platform that fits 100s of customers and fulfills their needs.

We got to take the power back

It might be confusing to run data center SoC against the mobile cores. It makes more sense when you know that all current and future flagships mobile SoCs are power constrained. A mobile phone SoC is power constrained due to its form factor, while server data center SoC needs to fit in 250 to 300W TDP. The math is straightforward; the highest TDP per core that fits 250 to 300W TDP total power budget, gives you the highest core count. For example, a 128 core can afford 2.34W per CPU core, assuming that all power budget goes to CPU. In reality it is slightly less than 300W available just for CPUs as one needs to power the rest of the server too.

Nuvia, just like the rest of the industry, assumes that future flagship SoCs will have a minimum of 64 cores and a maximum of 128 cores. AMD Rome and Milan already have 64 X86 cores while Ampere plans to have stock ARM Neoverse N1 128 core solution. Based on the Geekbench numbers stock, the ARM stock core won't get you leadership.

Total power per CPU ranges between 1W and 4.5W when heavily utilizes, which is often the case in a datacenter environment.

2X faster than the competition in 1 to 4.5 W power envelope

No matter which scenario is considered, either unconstrained peak performance or power/thermally constrained performance, Phoenix should have a significant lead.
Founder and SVP System Engineering at NUVIA Inc

When measured against current products available in-market in the 1W-4.5W power envelope (per core), the Phoenix CPU core performs up to 2X faster than the competition. 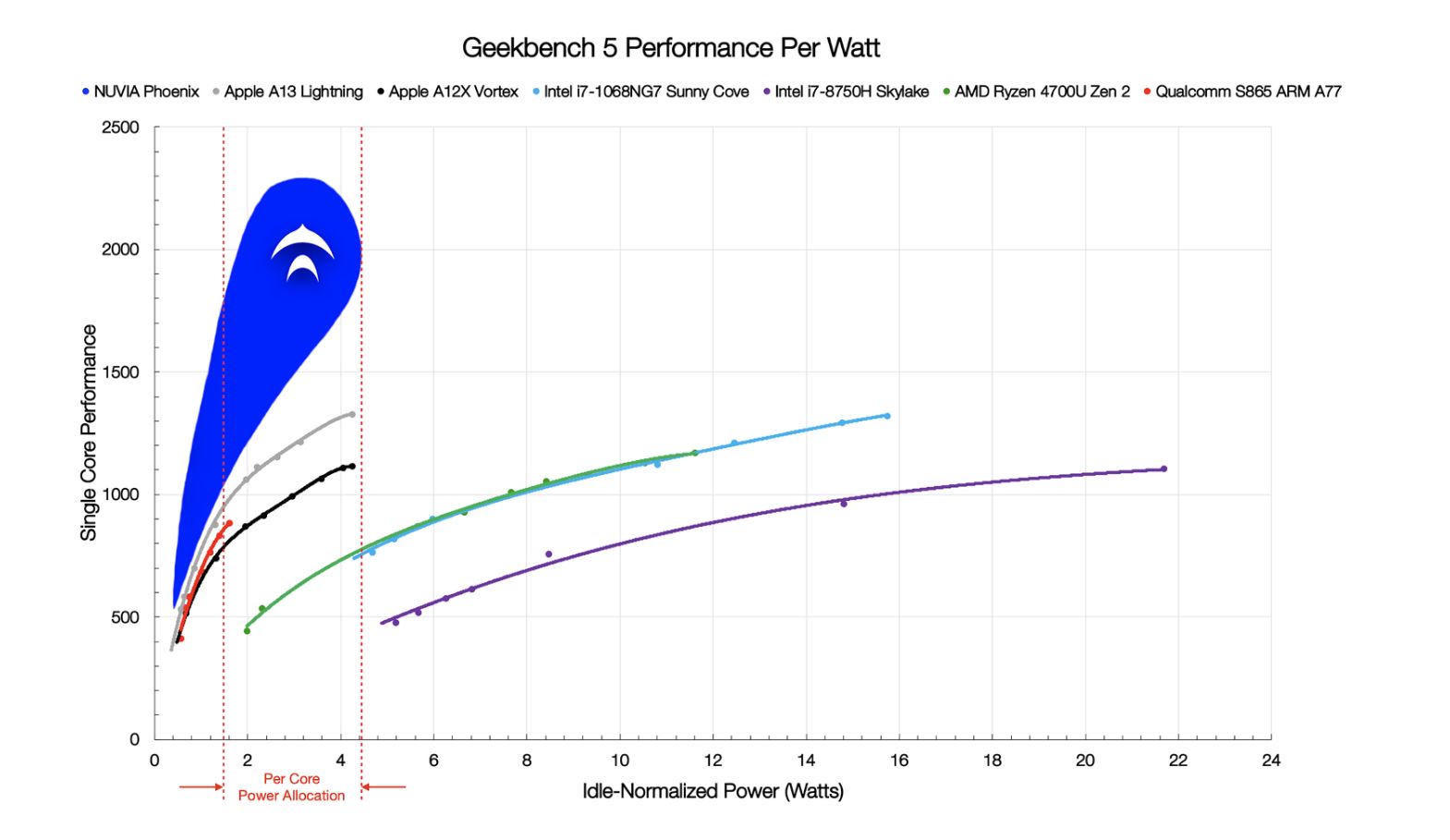 Nuvia used mobile devices as it was easier to monitor the power drainage at the battery connection point. It is reasonably easy, smart, straight forward, and inexpensive. Still, at the same time, each of the mobile products did represent a server solution based on a similar CPU core.

Intel's 10nm Core i7-1068NG7 Ice Lake-based SoC has the highest score from non Nuvia products, and a similar core will find its way to soon to launch Ice Lake server core. Intel Core i7-8750H based on Skylake is similar to existing Xeons selling today. AMD's Ryzen 4700U is using Zen 2 that is part of the Rome EPYC CCX chiplet solution, and Qualcomm's Snapdragon 865 utilizes ARM's latest A77 at latest TSMC 7nm. The latest announced Ampere Altra, and Amazon Graviton 2 both use an ARM N1 CPU core that is more closely related to the older A76, and both are built upon TSMC's 7nm process node. Lastly, the Apple A13 and A12Z demonstrate the current fastest ARM-based processors, also both built upon TSMC's 7nm process node.

..and justice for all

Nuvia expects that the competition can step up the game in the next 18 months. Even with significant performance gains of over 20+ percent with new CPU architectures, Nuvia will continue to hold a clear position of leadership in performance-per-watt. Bruno believes that performance from the Phoenix and Orion SoC is a step-function increase in performance that will serve as a foundation needed to power the next era of cloud computing. It definitely sounds more than promising.

Last modified on 13 August 2020
Rate this item
(9 votes)
Tagged under
More in this category: « Trump asks court to reject social media gagging case Lenovo does better than expected »
back to top