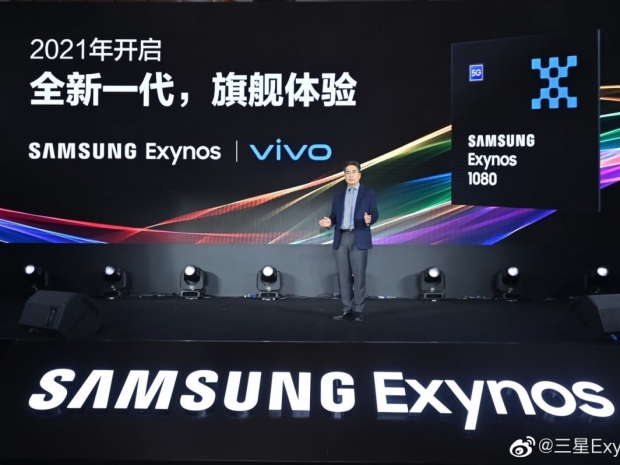 A bit better than the last one

It is the first platform by the Korean company built on the 5nm EUV FinFET technology and comes as a successor to the Exynos 980 with its integrated 5G modem.

The 1080 is a little better than the 980 in terms of performance and there are more features. However this chip will fit between a mid-range and a flagship SoC.

The 5G integrated modem supports both Sub-6GHz and mmWave standards, and phones with Exynos 1080 chipset can also enjoy Cat.18 LTE downlink and uplink. Other connectivity options include Bluetooth 5.2, all the Wi-Fi bands, and FM Radio.

The new SoC has a new 1+3+4 CPU configuration, as reasonably large GPU, and full 5G connectivity integrated, and is the first publicly announced SoC to be manufactured on Samsung's new 5LPE process node.

This is the first time Samsung has adopted a 1+3+4 CPU configuration and appears to be following Qualcomm. It is now adopting the Cortex-A78 architecture on the part of the performance cores. One core is clocked at 2.8GHz while the three others are running at 2.6GHz.

Qualcomm had first introduced such a setup and it’s become popular as it gives the benefit of both performance and power efficiency. The four big cores are accompanied by four Cortex-A55 cores at 2.0GHz.

You get support for the latest LPDDR4x and LPDDR5 RAM standards as well as UFS 3.1 storage. It can be hooked to WQHD+ displays of up to 90Hz refresh rate, or Full HD+ panels at up to 144Hz refresh rate.

First phones with Exynos 1080 are expected to arrive in early 2021. During an event in China, a company representative revealed that it's actually vivo that will first adopt the platform as it did with the Exynos 980 last year.

Last modified on 13 November 2020
Rate this item
(1 Vote)
Tagged under
More in this category: « Why Google Maps is the creepiest app Nordics already clued up about home working »
back to top