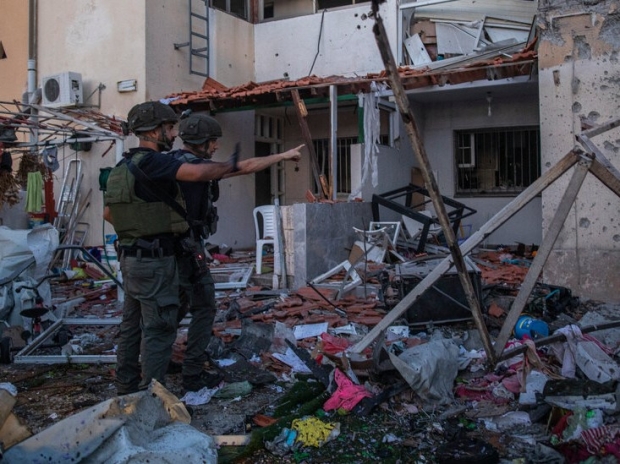 Facebook, Instagram and WhatsApp are facing a reputational crisis after losing a battle against the Israeli government and their own moderation software.

Western social media is seeing plummeting approval rates and advertising sales in Arab countries, according to leaked documents obtained by NBC News because its complaints system is being used by the Israelis to silence Palestinian voices.

The social media company regularly polls users of Facebook and Instagram about how much they believe the company cares about them. Facebook converts the results into a 'Cares About Users' metric which acts as a bellwether for the apps' popularity. Since the start of the latest Israel-Hamas conflict, the metric among Instagram users in Facebook's Middle East and North Africa region is at its lowest in history, and fell almost five percentage points in a week, according to the research. Instagram's score measuring whether users think the app is good for the world, referred to as 'Good For World,' has also dropped in the region to its lowest level after losing more than five percentage points in a week.

The low approval ratings have been compounded by a campaign by pro-Palestinian and free speech activists to target Facebook with 1-star reviews on the Apple and Google app stores. The campaign tanked Facebook's average rating from above 4 out of 5 stars on both app stores to 2.2 on the App Store and 2.3 on Google Play as of Wednesday.

According to leaked internal posts, the issue has been categorised internally as a "severity 1" problem for Facebook, which is the second-highest priority issue after a "severity 0" incident, which is reserved for when the website is down. "Users are feeling that they are being censored, getting limited distribution, and ultimately silenced", one senior software engineer said in a post on Facebook's internal message board. "As a result, our users have started protesting by leaving 1-star reviews."

What appears to have happened is that that the Israeli government is spending millions on digital tools and campaigns targeting social media content. It is not all high tech either.  Israel "also funds a program that pays students to post and report content on social media in what is described as 'online public diplomacy".

The result was that days after violent conflict erupted in Israel and the Palestinian territories, both Facebook and Twitter wrongly blocked or restricted millions of mostly pro-Palestinian posts and accounts related to the crisis.

The issue might not all be down to an Israeli plot either.  The system’s automatic defences are stacked against the Palestinians.

Twitter thought that its service mistakenly identified the rapid-firing tweeting during the confrontations as spam, resulting in hundreds of accounts being temporarily locked and the tweets not showing up when searched for. Facebook-owned Instagram gave several explanations for its problems, including a software bug that temporarily blocked video-sharing and saying its hate speech detection software misidentified a key hashtag as associated with a terrorist group.

The companies said the problems were quickly resolved and the accounts restored. But some activists say many posts are still being censored. Experts in free speech and technology said that's because the issues are connected to a broader problem: overzealous software algorithms that are designed to protect but end up wrongly penalising marginalised groups that rely on social media to build support.

Jillian York, a director at the Electronic Frontier Foundation, an advocacy group that opposes government surveillance, has researched tech company practices in the Middle East. She said she doesn't believe that content moderation — human or algorithmic — can work at scale.

Palestinian activists and experts who study social movements say it was another watershed historical moment in which social media helped alter the course of events...

Payment app Venmo also mistakenly suspended transactions of humanitarian aid to Palestinians during the war. The company said it was trying to comply with US sanctions and had resolved the issues.

Last modified on 31 May 2021
Rate this item
(2 votes)
Tagged under
More in this category: « Apple throttles RAM on M1 iPad Pro Time to invent a new browser »
back to top