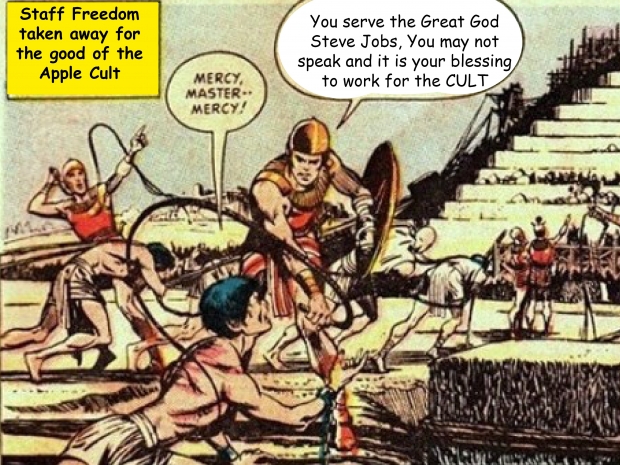 The fruity cargo cult appears to have dumped its “right on” image in favour of something a little more misogynistic.

We have been reporting how women have been complaining about how Jobs' Mob managers treat them, and a “right on” company would form a committee to investigate the question and come up with a policy which enabled its female employees to feel that they were working for a company that cared.

Apple seems to have taken the view that it is better to force women staff into silence and fire those who fail to comply. Of course this might protect the male managers that the women are complaining about, but it does make for a PR disaster which could only be worse if Tim Cook shot a child’s tame puma cub during an expedition to burn down 100 hectares of rainforest.

Now it is facing yet another charge from the National Labor Relations Board over its firing of a senior employee after she complained about how the company handled alleged internal issues.

Ashley Gjøvik, a senior engineering program manager at Apple for six years, first filed claims of work retaliation with the NLRB in late August, setting off an investigation by the government agency.

She said she experienced sexual harassment at work and that her complaint was revealed to the alleged harasser. Gjøvik has said Apple retaliated against her for the NLRB complaint and for earlier raising concerns about the office she and others worked in, as it sits on a Superfund site.

Her usual work was taken away and replaced with "unfavorable" assignments, she said in initial NLRB paperwork. Her supervisory responsibilities were also taken and eventually she was forced into administrative leave.

Gjøvik was fired last week by Apple, a move the company told her was because she shared "proprietary" company information, which Gjøvik denies.

Now Apple has been hit with a new NLRB charge for "termination as retaliation", according to a filing by the agency.

Gjøvik pointed out that Apple can try to rule with an iron fist, but the company is nothing without its employees.

“They need us. The more we speak up, the more we join together, the more they will have to give, instead of take or threaten," Gjøvik said. "I hope my continued fight and the ongoing press coverage around these concerns will force them to do better. At the very least, I hope it inspires employees to still speak up."

The NLRB, the federal agency that enforces US labor law, automatically investigates all claims it receives. If its investigation into Apple shows Gjøvik's claims have merit, it will issue a formal complaint against the company leading to a hearing if the issue is not settled beforehand.

Gjøvik has also filed a whistleblower complaint with the federal Occupational Health and Safety Administration, as well as its state counterpart CalOSHA, given her complaint to Apple regarding the office being on a Superfund site. Last week, OSHA confirmed in an email that her claimed retaliation will be formally investigated.

She is not the only Apple employee to have formally complained lately of Apple's conduct as an employer. Another NLRB charge was filed last week by Cher Scarlett, a software engineer.

She claims the company interfered in and stopped conversations about pay between workers. Apple did recently shut down a Slack channel employees started to discuss the issue of pay equity. Employees' right to discuss pay is protected by US law and experts say Apple is on unstable ground in its attempt to stop such conversations, even on a company channel.

The hashtag #AppleToo has also gained traction in recent weeks, being used as a Twitter tag for stories by current and former Apple workers of alleged mistreatment, including sexism, racism, intimidation, and abuse. It has almost 4,000 followers and a stated goal of uniting the company's workers "to change Apple".

Last modified on 17 September 2021
Rate this item
(3 votes)
Tagged under
More in this category: « Time names Nvidia CEO Jensen Huang “most influential” human Wikimedia admits some of its “editors” were persecuting others »
back to top