Aufero Laser 2 made for beginners 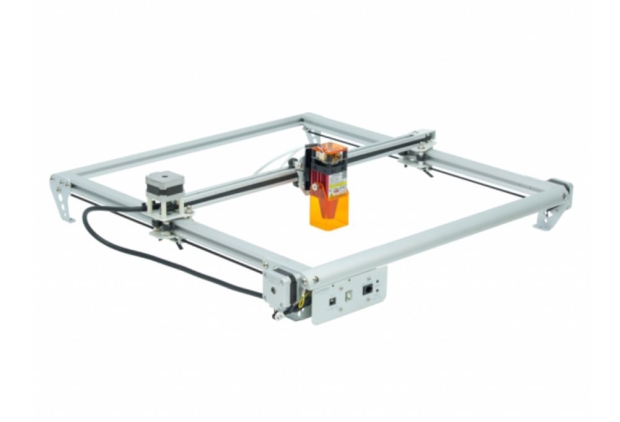 Sponsored Article: The fastest laser engraver ever, is it actually made for beginners

We are in an era of Personalization. Customized Gifts, daily necessities, small DIY projects, and even clothing accessories are in high demand for Personalization. The above mentioned is one of the reasons why laser engraving machines have become increasingly popular in the past years. However, some of the key obstructions to the beginner user are the price and complexity of the machines.

ORTUR, which has been at the forefront of the laser engraving industry, has experienced through customer support most of the issues described above. It is available to our readers at the official website for $369.99 or $269.00 depending on the option.

This barrier to entry on price and know-how is exactly the problem the Aufero Laser Product line is trying to mitigate.

In order to serve more novice users, ORTUR released its entry-level engraving machine sub-brand Aufero and its first model for beginners—— Aufero Laser 1 several months ago. Soon after, Aufero brought its upgraded Aufero Laser 2, which is also positioned for entry to an intermediary user, allowing a bigger work area but maintaining a simple and stable platform. All the Ortur Know-How, at a friendly price, starting at only $269.

The most complete introductory guide in the industry, even someone never used can get started easily

After getting the machine, novices may be confused and have countless questions: how to install with many parts and brief manuals? Where to download the engraving software? How to engrave different materials? How to set parameters? And so many other questions… Don’t worry, Aufero has the complete introductory guide in the industry, which can help you “from beginner to master”. 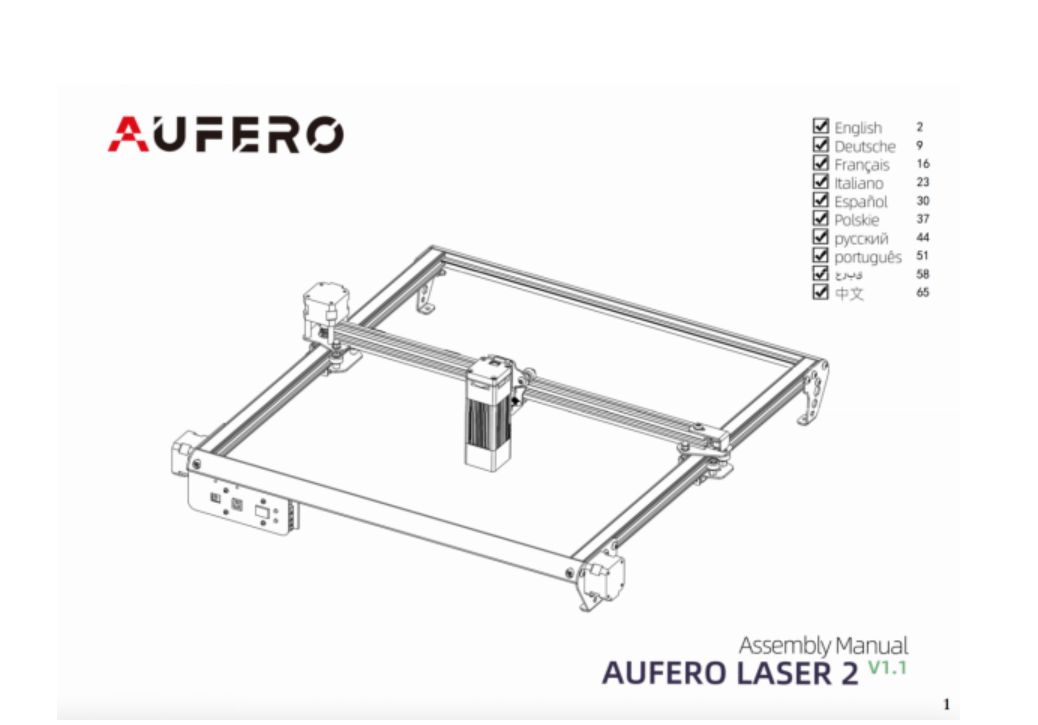 First of all, Aufero Laser 2 is equipped with a 71-page manual covering ten languages. Every step, component, and operation is detailed in the form of color pictures. Just follow the tutorial step by step, and it only takes 20 minutes to finish installing independently, which is very convenient. If you feel that the manual is also hard to follow, Aufero has also released detailed installation videos, and it is easier to follow the video to install.

It’s not easy to be detailed because Aufero constantly listens to users and quickly updates and optimizes the product. After the release of Aufero Laser 1, its plug-and-play feature was widely praised, but some users reported that its manual was too brief and inconvenient to install and use. Only three months after the release of the first generation, Aufero has made the manual to the most detailed level in the industry in its second-generation product so that all novices can quickly get started.

From that, can see its attention to the user’s voice and the products.

At the same time, as a multi-functional laser engraving machine that can engrave a variety of materials, Aufero also provides videos about engraving tutorials for various materials, which is very intimate. 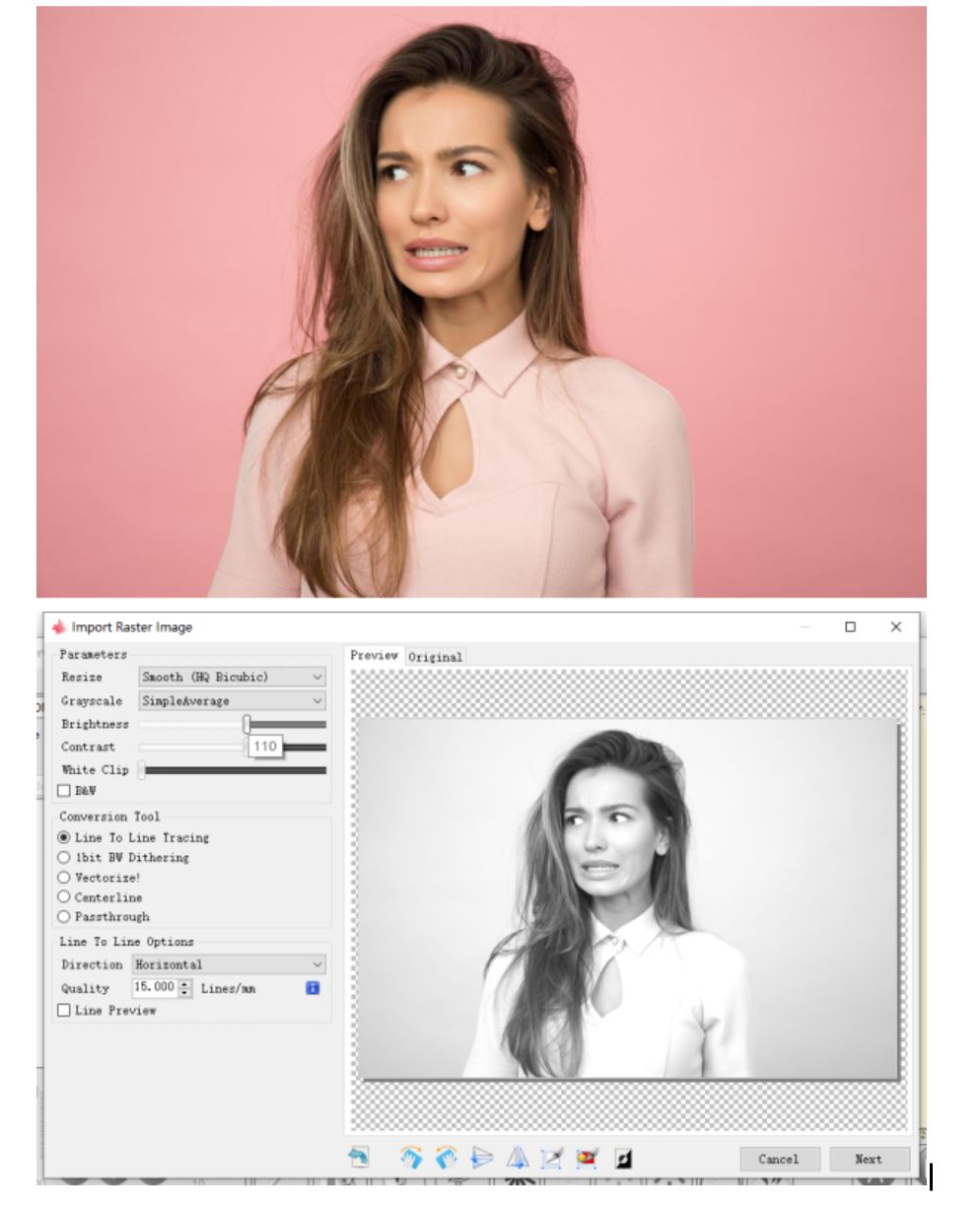 Before you start engraving, you may still not know how to set engraving parameters, especially if you are still inexperienced in how to set different pictures. Then the parameters of the 50 pictures provided by Aufero are very useful. You can directly refer to this parameter for setting at first. Of course, if you don’t know what pictures to use to test the machine, Aufero also provides some materials for testing. All aspects have been considered for you.If you still don’t know how to use it, you can follow those solutions:

1) Please find all the documents you need at: https://ortur.tech/auferolaser2/ or

2)For support inquiries, please use Ortur’s Ticketing System at: https://ortur.tech/support

3) Please join the Facebook Communities to get and give:

The fastest engraving speed ever, stable, efficient, and easy to use

It is naturally inseparable from the luxurious configuration of its software and hardware to have such excellent results. Aufero Laser 2 uses ORTUR’s newest ninth-generation motherboard. Compared with the previous generation motherboard, the speed is increased by 10%, its movement is smoother and more delicate, and its engraving precision is higher. With the current industry’s most advanced ORTUR 1.8 firmware version, the stable FreerTOS system and the faster ESP32 chip naturally bring the engraving speed that breaks through the industry.

At the same time, the engraving area of Aufero Laser 2 has also been upgraded to 390x390mm, which is larger than two 15-inch large-screen laptops put together, which means that you can engrave larger materials, such as whole logs, clothing, and so on, which has wider applicability. In addition, Aufero Laser 2 also uses an X-axis structure with a low center of gravity, which can ensure the accuracy of engraving at extremely high engraving speed, and its XY-axis scale is also convenient for placing engraved objects.

Powerful performance, don’t need to worry about compatibility and install drivers to support mainstream Win10 and Mac systems. And even Aufero will release its dedicated APP to simplify the operation further. In March, Aufero will also launch a new version of the OOC2.0 offline control screen, which can operate the engraving machine normally without a computer. It can be said to be a fast and easy-to-use benchmark.

Compatible with a variety of laser modules, multiple functions can be easily expanded

Modularity is an essential function of high-end engraving machines. It is not only convenient for novices to install the machine but also expands more functions later. Aufero Laser 2 naturally also supports modular customization. For example, its laser module can be freely matched with ORTUR’s LU2-2, LU2-4-SF, LU2-4-LF, LU2-10 (10W) to cope with multiple complex scenes. 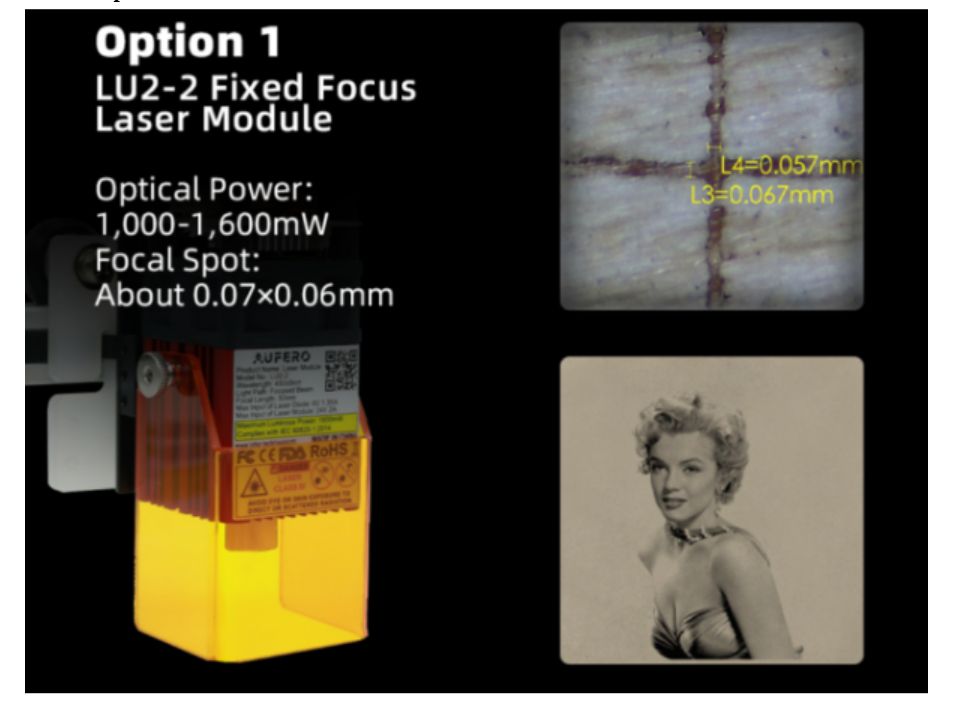 This laser plug features high-precision patterns and is suitable for materials with low hardness. You can use it to engrave your favorite patterns on the phone case, engrave unique texts on bread/steak, engrave photos with wood instead of paper photos, easily complete “decoupage” paintings with paper, and make leather such as wallets, belts, etc. Print your unique logo on the product, etc., and you can use your creativity at will. 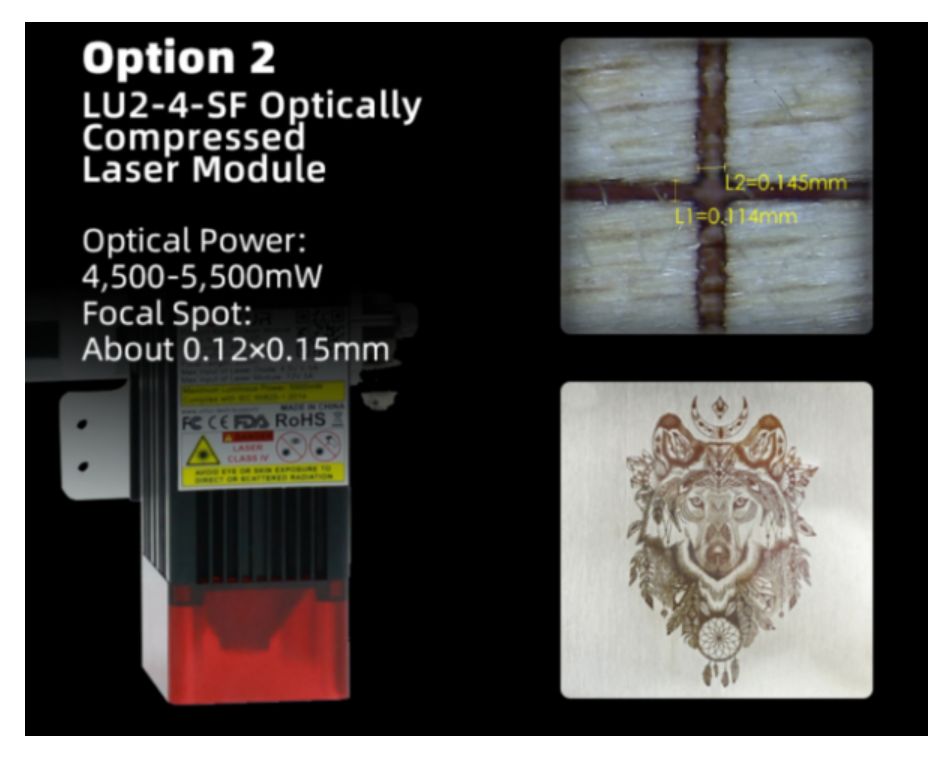 B.While having a good cutting ability, it is more suitable for engraving materials with higher hardness, such as stainless steel, and the speed is also faster.

This laser module has a good cutting ability but better engraving performance, suitable for materials with higher hardness, such as glass, stone, ceramic, stainless steel, and so on. For example, you can engrave a commemorative pattern on the transparent glass to make beautiful artwork for your friends; you can also engrave a personalized image on a small slab stone, which is also a beautiful decoration at home; If you are a shop owner, you can also engrave the logo of your own shop on small pieces of ceramics and give them to your patrons; you can even engrave your own business card information on the stainless steel sheet, making it the unique durable stainless steel business card. 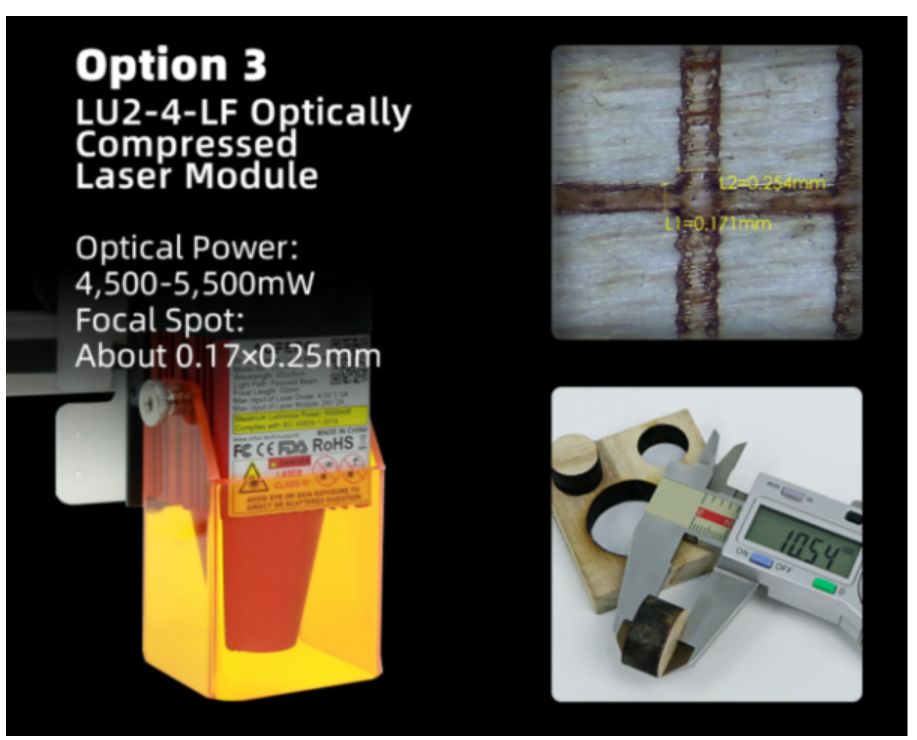 B.It has a good engraving effect and is more suitable for cutting thicker boards.

C.There is air assist, so it is not easy to have black edges, but you need to bring your own air compressor

While this laser module has a good engraving effect, the cutting effect gives better results. You can use some beautiful wooden boards with your own personal design to cut them into artworks of different shapes; of course, in addition to wooden boards, it also supports various materials such as leather and black acrylic, it can also Cut these materials into the shape you want and engrave your design.

It is important to mention that this laser module has a power of 10W, which is the highest in the industry. So it is also equipped with a dual-fan cooling system. The powerful power makes it not only can be capable of general engraving work but also can easily cut materials such as 10mm pine board. At the same time of strong power, the focus is also controlled very small (about 0.135*0.08mm), which is also capable of high-precision work. 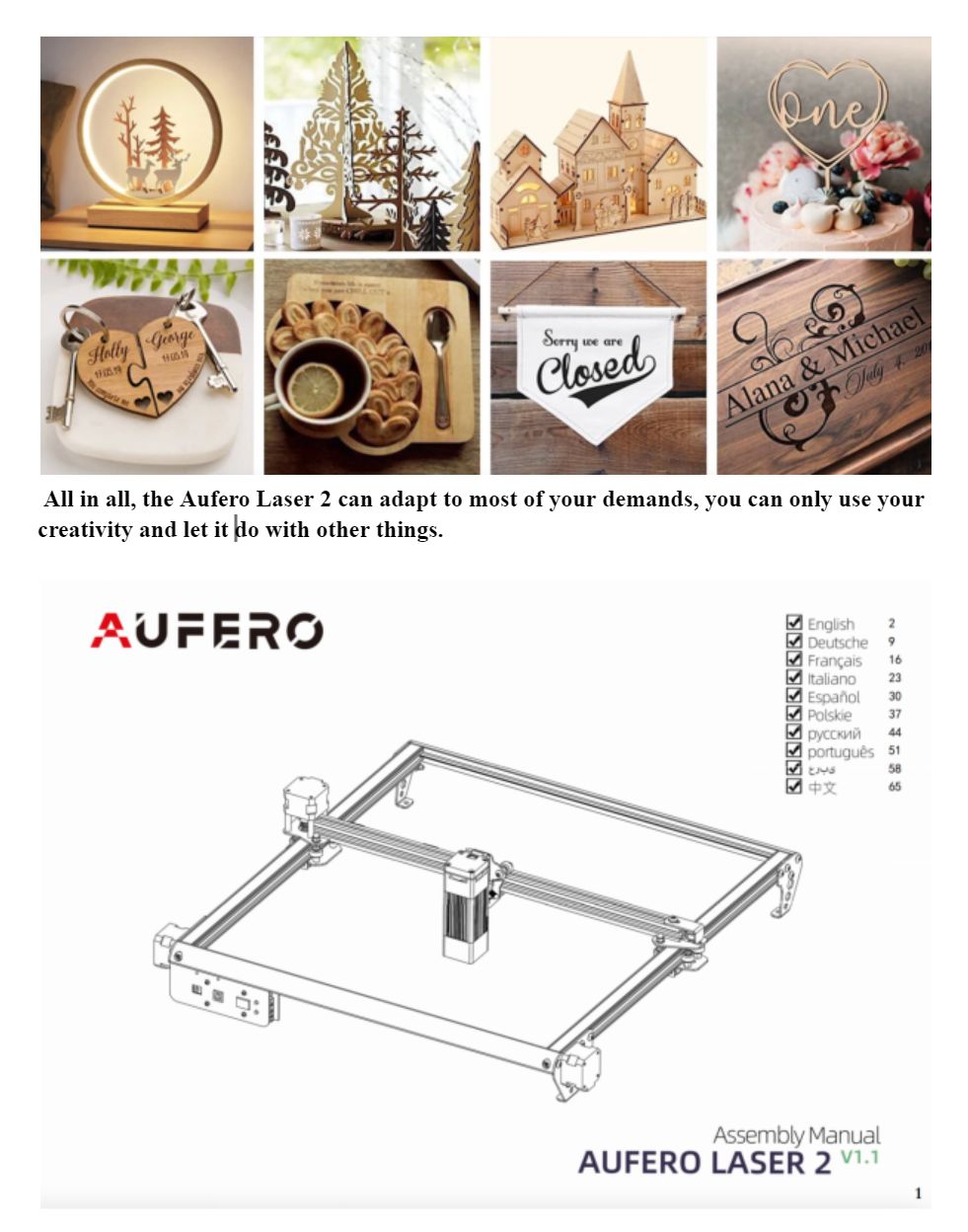 Overall, the Aufero Laser 2 can adapt to most of your demands. You can only use your creativity and let it do with other things.

For beginners, safety is also a very important part. So Aufero Laser 2 has designed a 4-fold safety protection system. 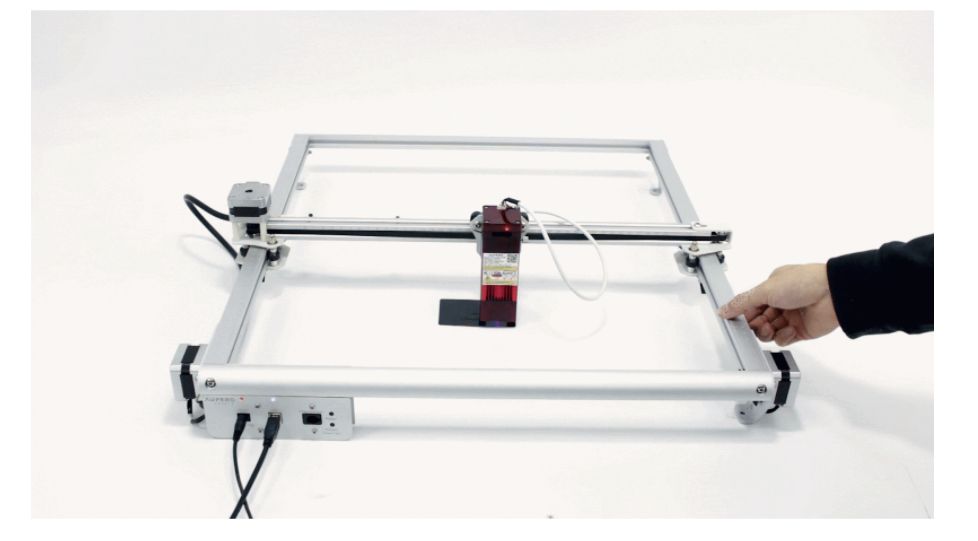 Third, set the Exposure Duration Detection and Limitation. If you pour a coffee or answer a phone call in the middle of debugging the laser power, if the machine is not instructed within 30 seconds, the machine will automatically stop working to prevent any possible safety hazards.

Fourth, it has a Safe Power Control System. When the engraving machine is turned off, the mainboard will cut off the current output to the laser module to avoid any hidden dangers that may occur. Imagine that you don’t need to unplug it manually when you are finished using it. After the machine is turned off, the power supply will automatically stop, and the laser will stop working. So, if you are an inexperienced novice, a subtle security protection design may bring you more security.

In a word, whether you are a novice who is the first to buy an engraving machine or an experienced engraver, Aufero’s complete safety protection can buy and use with confidence.

Summary: Master-level powerful performance, the best choice for the novice.

Looking at it entirely, you will find that Aufero Laser 2 not only provides the most novice-friendly experience in the entire industry but also is different from other products that it’s for novices but in fact shrinking and reducing, Aufero Laser 2 brings this product comes with top software and hardware and extremely outstanding performance. Combined with its starting price of just $269, it has high-cost performance. For beginners looking to buy a laser engraver, the Aufero Laser 2 is a perfect choice. 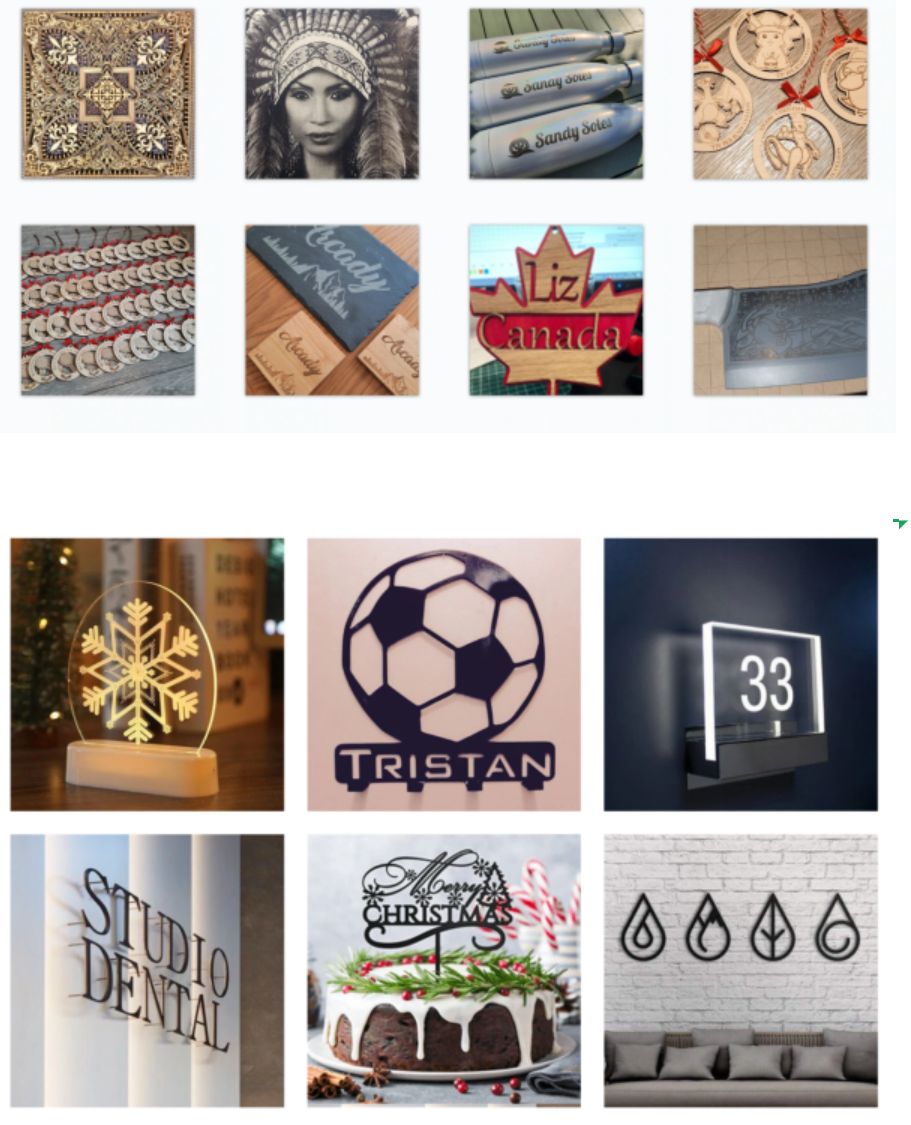 In fact, as a leader in the laser engraving machine industry, ORTUR has always represented the industry’s top technology and excellent products. So it became the first brand recommended by LaserGRBL.

However, compared to the high-end market and products it is good at, products like Aufero Laser 2 that have excellent performance and friendly novice experience may have greater significance: let more people use laser engraving machines and transform more ideas into extraordinary ideas works.

Just like these meaningful stories from ORTUR users: “A coffee shop owner used an ORTUR laser engraver to create personalized advertisements and became famous among customers in big cities; a French wine estate owner used an ORTUR laser Engraved with memories that belong to each barrel of wine; a Hollywood filmmaker used an ORTUR laser engraver to customize a unique electric guitar memorabilia for his behind-the-scenes team; there’s even an Italian gentleman in a restaurant use The steak with the words ‘Marry Me’  proposed successfully to his girlfriend.” There is no doubt that more ordinary users will also use Aufero Laser 2 to create more outstanding works and beautiful stories.

Last modified on 16 January 2023
Rate this item
(0 votes)
Tagged under
More in this category: « Intel beats EU Apple releases new “improvements” to OS »
back to top