AMD is now in the fastest supercomputer in the world 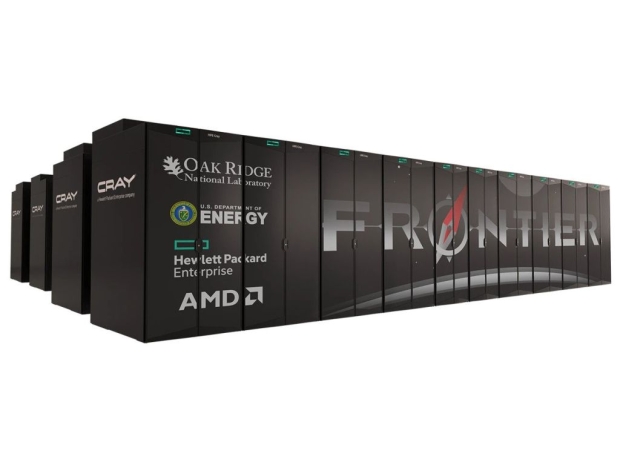 The AMD-powered Frontier supercomputer is now the first officially recognized exascale supercomputer in the world, topping 1.102 ExaFlop/s during a sustained Linpack run.

This makes it the top of the world's fastest supercomputers, beating Japan's Fugaku. Frontier is faster than the next seven supercomputers on the list, combined. Frontier hit 1.1 ExaFlops during a sustained Linpack FP64 benchmark, the system delivers up to 1.69 ExaFlops in peak performance.

Frontier is the fastest AI system and can reach speeds of 6.88 ExaFlops of mixed-precision performance in the HPL-AI benchmark. That equates to 68 million instructions per second for each neuron in the brain [That is without coffee].

Additionally, the Frontier Test and Development (Crusher) system placed first on the Green500, denoting that Frontier's architecture is now also the most power-efficient supercomputing architecture in the world (the primary Frontier system ranks second on the Top500). The system delivered 52.23 GFlops per watt while consuming 21.1 MW of power during the run. At full utilization, Frontier consumes 29 MW.

The news means that AMD EPYC-powered systems now comprise five of the top ten supercomputers in the world, and ten of the top twenty. In fact, AMD's EPYC is now in 94 of the Top500 supercomputers in the world, marking a steady increase over the 73 systems listed in November 2021, and the 49 listed in June 2021. AMD also appears in more than half of the new systems on the list this year.

Intel CPUs still populate most systems on the Top500, while Nvidia GPUs also continue as the dominant accelerator.

Rate this item
(1 Vote)
Tagged under
More in this category: « Kiwis have 25 gigabits per second broadband Employers turn to robots to cope with labour shortages »
back to top