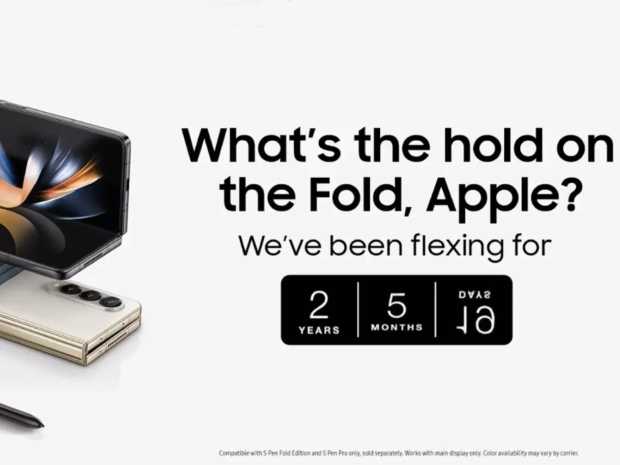 Samsung has mocked Apple for its inability to invent a folding phone.

The US tech press had expected Apple to release a foldable phone in the coming iPhone 14 lineup but suddenly stopped talking about the technology when it became clear that it Apple could not get it to go. In fact, the Tame Apple Press has claimed that Apple invented foldables already and will be coming out about the same time as an electric car which is pretty much true.

Samsung launched its Galaxy Z Flip 4 and Galaxy Z Fold 4 foldable phones last month to critical acclaim, and during Apple's launch event, the company released a "Join the Flip" short film/commercial that features a young woman that is literally haunted by the Samsung Z Flip foldability.

It is not just foldables that Samsung is mocking Apple.  Samsung even points out that its camera has had 108 megapixels for over two years, taking a slap at the Cupertino tech giant's 48-megapixel sensor.

While we doubt that the adverts are causing many issues for Apple. the Tame Apple Press is reacting with indignation at any allegation that Apple has fallen behind on any technology race.

One stauch Apple defender pointed out that Samsung once produced a series of ads admonishing Apple for doing away with the headphone jack. This had to be pulled when users didn't respond to the company's attempt at a brand battle for the ages.

Another trotted out the same trope "My iPhone may not fold, but it never catches any type of malware from Apple's App Store."

More in this category: « Facebook logo might be a kiss of death on websites Google cans Pixelbook laptop »
back to top