Cheapest 13-incher with matte screen
Just days after Lenovo introduced a Fusion based variant of its 11.6-inch ThinkPad X121, the affordable 13-inch Edge E325 got its Fusion makeover.

So far three SKUs based on AMD’s E-350 APU are listed in Europe and they all seem rather affordable. The cheapest one goes for just €379 and it’s a very nice deal. Basically, it is the cheapest 13-incher with a matte screen in Europe.

However, the low price doesn’t mean consumers will be missing out on much. It packs 4GB of memory, 320GB hard drive, 3 USB  2.0 ports, LAN, WLAN, eSATA, HDMI and a card reader. The weight stands at 1.74kg with a 6-cell battery. 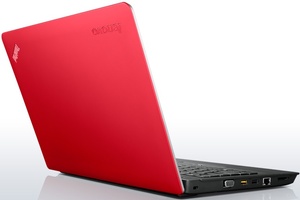 The second SKU costs €499, but you get a 128GB SSD instead of the mechanical drive. This sounds like a bargain, but frankly we don’t see the point in trying to improve performance of an entry-level Fusion platform with a pricey SSD. The third SKU is a stylish red version for tech savvy ladies.

The only thing all of them lack is an OS, since they ship with FreeDOS, and this is where Lenovo saved a few pennies.
Rate this item
(10 votes)
Tagged under
More in this category: « Android smartphone users prefer iPads Overclockable tablets coming soon »
back to top