Lenovo can certainly be happy with its CES 2013 showing. The company easily gets the the biggest tablet award with the new Horizon Table PC that can be used as a touch screen table, folded to be used as a portable 27-inch tablet, or just used as an All-in-One PC.

Despite its claimed portability we think that it is just silly to carry a 7.7kg heavy 27-incher around, but yeah we must agree that it is still a portable device. At 27mm (1.1-inch) it is pretty thin and has a built-in stand that allows it to stay in an upright position as well.

With enough room behind the 27-inch 1080p touchscreen, the CPU choice ranges from Core i3 to Core i7 CPU. It can also be equipped with Nvidia Geforce GT 620M GPU and up to 1TB of storage space.

Lenovo also added the Aura dual moon UI that is pretty much Lenovo's hub for games and media. Monopoly comes preloaded turning it into a 27-inch interactive board, although we would rather use it for a good game of chess with enough room to hold a cup of coffee.

The 27-inches of touchscreen estate and decent specs come at a price so Lenovo's Horizon Table PC will start at US $1699 making it quite an expensive table. If only they made it spill proof, it might have ended up a bit more interesting. 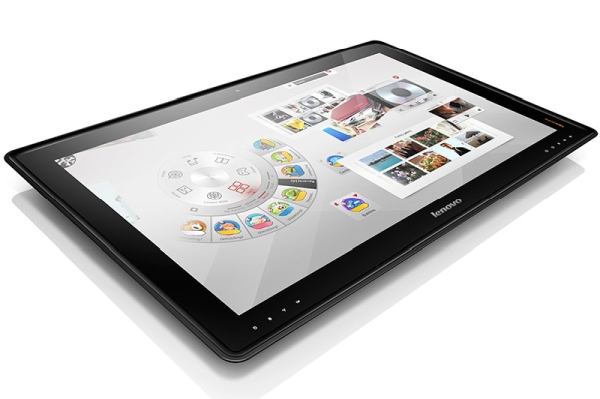 Last modified on 07 January 2013
Rate this item
(0 votes)
Tagged under
More in this category: « Samsung beefs up Series 7 range Vizio shows its first Windows 8 tablet »
back to top