Based on Haswell Celeron 2955U CPU

Although it was already teased by Intel at IDF, Toshiba has now officially confirmed that it will launch a Chrome OS device, we have not heard much until now. Toshiba has now decided to take on the likes of HP and Acer and launch its own version of the Chromebook. With a 13.3-inch screen and based on Intel's Haswell Celeron 2955U CPU, it is definitely pushing the boundries of cheap and "portable" Chromebook design.

Of course, thanks to the 13.3-inch screen, Toshiba will have less to none competition in the Chromebook market and despite that same larger screen and quite decent specifications, Toshiba aims to take on HP's smaller Chromebook 11 with the same price tag. The larger screen, of course, makes the Toshiba Chromebook a bit heavier than most Chromebooks around at around 1.3kg (3lbs) but it allowed Toshiba to squeeze in a much less cramped up keyboard and a heftier battery which should keep it alive for up to nine hours, according to Toshiba.

In order to fit the new Chromebook in that US $279 price tag, Toshiba had to go for a 13.3-inch 1366x768 resolution screen but the Intel Celeron 2955U CPU should give it enough performance for most, if not all, everyday office tasks. The rest of the specifications include 2GB of RAM, 16GB of built in storage, two USB 3.0 ports, HDMI output, webcam and SD card reader.

According to Toshiba, the WiFi-only edition should start shipping on February 16th for US $279 and the company could eventually launch a 4G version as well. 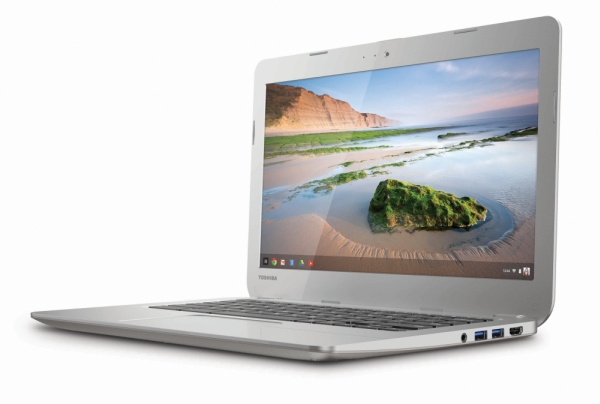 Last modified on 07 January 2014
Rate this item
(0 votes)
Tagged under
More in this category: « Tegra Note 7 getting Android 4.3 Acer working on Aspire S7 Ultrabook with WQHD display »
back to top