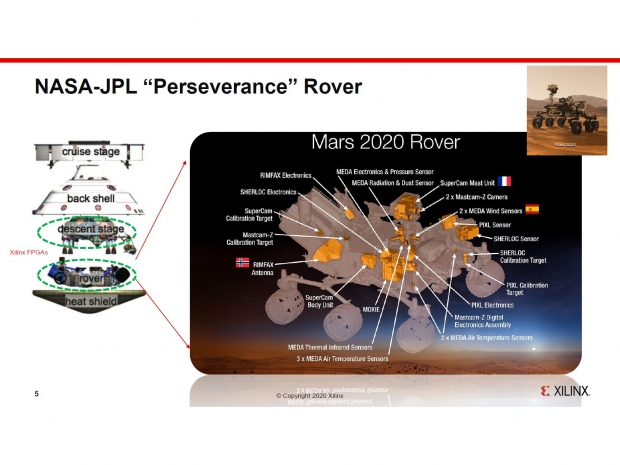 The Rover Perseverance is expected to land on February 18, 2021, at Jezero Crater, Mars, and is scheduled for a mission duration of at least one Mars year or about 687 Earth days.

What is fascinating about this vehicle is that it is packing 23 cameras, has a mass of 2260 kg, and it is more than twice heavier than the Curiosity Rover from 2011 (889 kg). 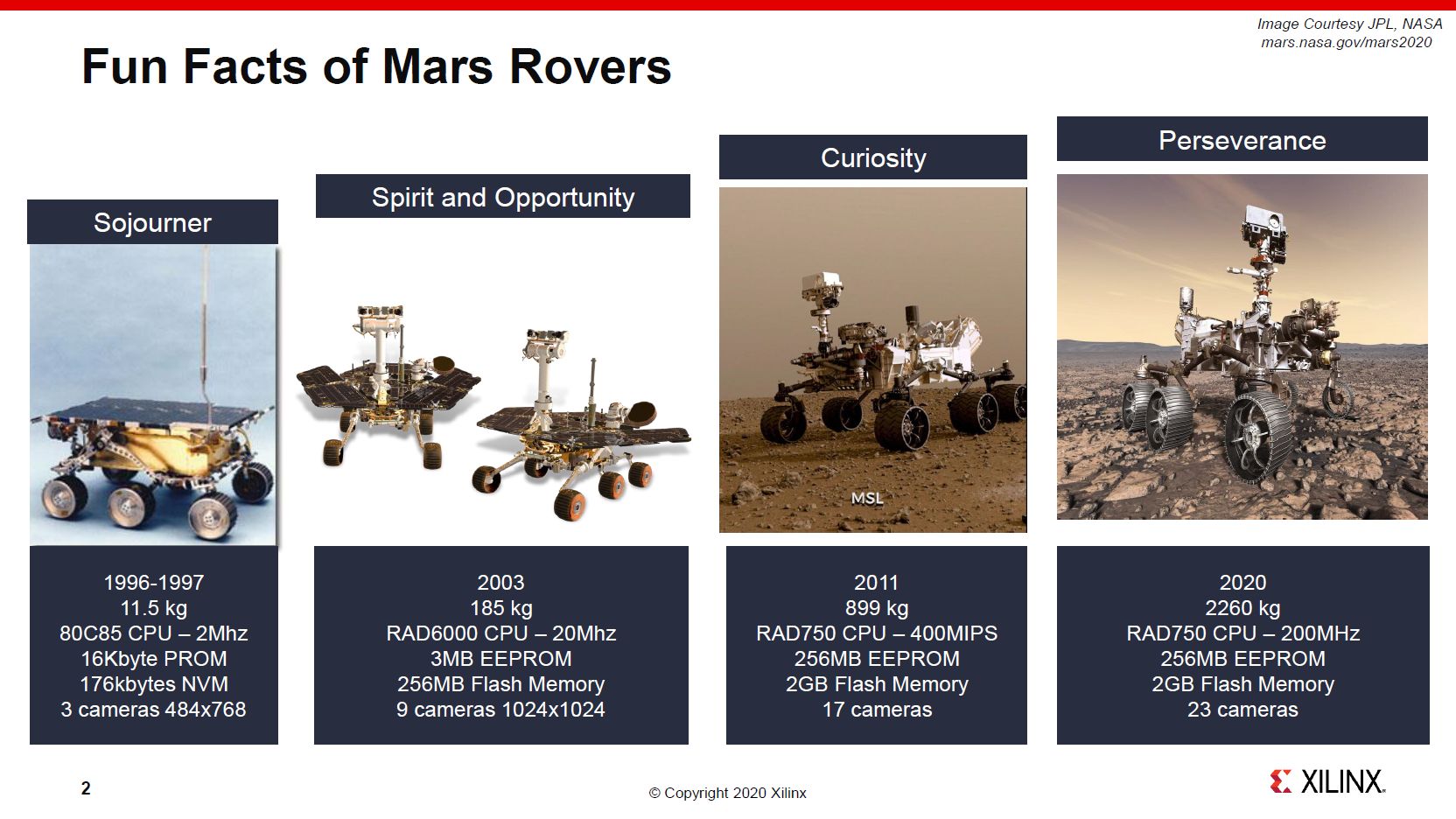 What is new about the Rover Mars 2020 Perseverance is the Hardware Accelerator (Vision Compute Element): XQR5VFX130 used to accelerate specific stereo and visual tasks like image rectification, filtering, detection, and matching. Xilinx helped bring computer vision and AI, making sense of the data in space on the Rover before they get sent to the Huston NASA headquarters. Many of the images captured will be useless and repetitive, and the computer vision element can process and decide to discard the bad ones.

A reconfigurable Virtex 5-SIRF, aka the "Vision Processor," has the task of managing image processing, filter detection, and classification. 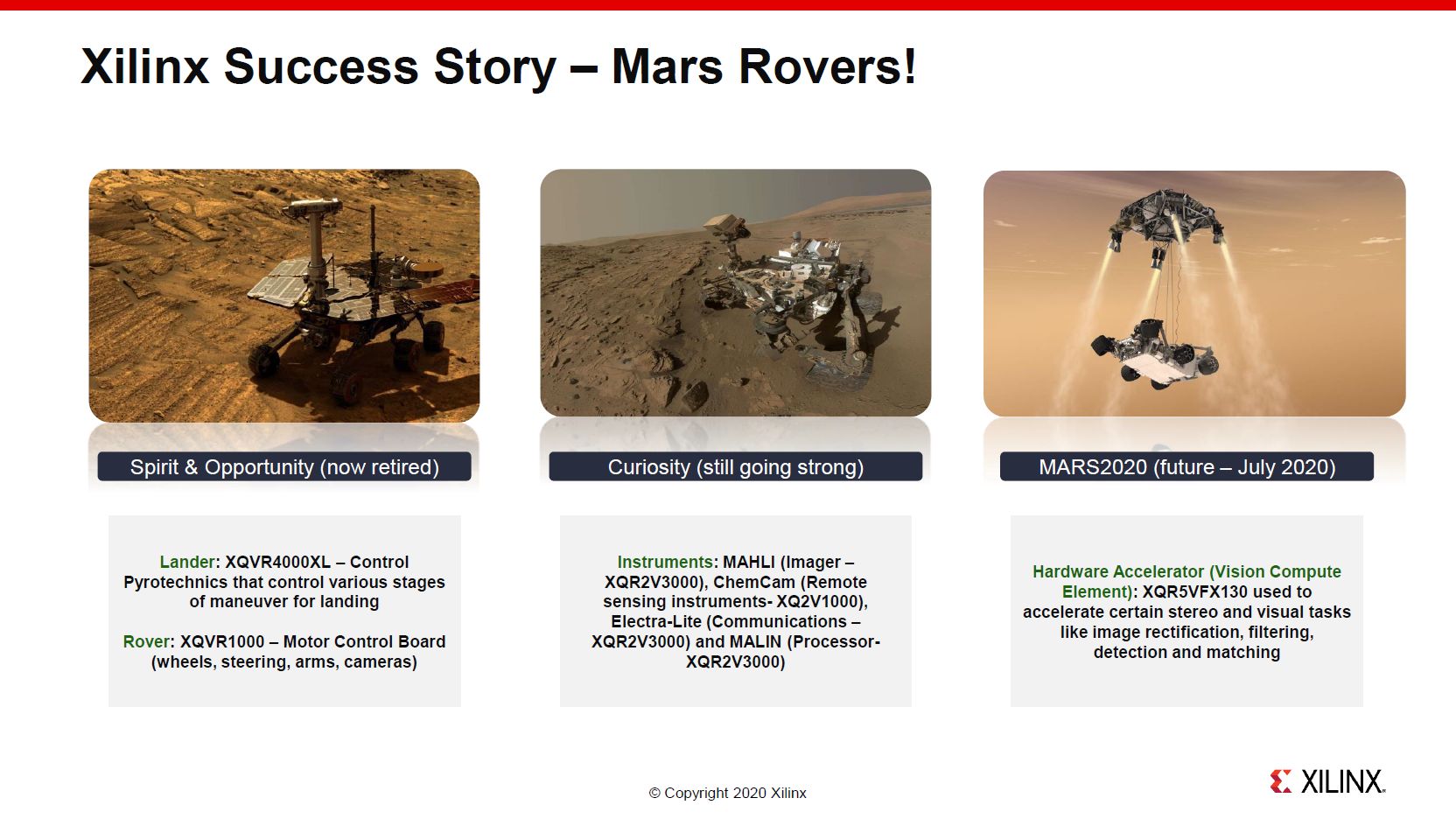 In comparison with the Curiosity Rover, the new vision compute element can detect a position change 18 times faster. The Mars Rover curiosity running 20MHz RAD6000 CPU needed 160 seconds to run through the visual odometry algorithm and detect position change. Thanks to the Xilinx FPGA and the RAD750 CPU, the same algorithm requires 8.8 seconds. That is how it gets 18 times improvement.

Let me point to six Xilinx parts that are powering different parts of the Mars Rover Preservance. Let's start with XQR4VFX60-10CF1144V powering instrument call PIXL. The abbreviation stands for The Planetary Instrument for X-ray, and its purpose is to identify chemical elements at a tiny scale as small as a grain of salt.

The XQR2V3000-4CG717V4349 XC2V3000-4BG728I powers Electra-lite instrument. The instrument's purpose is to maintain UHF Transceiver and runs relay telecommunications and navigation.

The Radar Terminal Descent Sensor (TDS) is powered by XQR2V3000-4CG717V4349. The TDS is essentially a Ka-band radar that provides range and velocity measurements through all phases of (post-heatshield separation, including Entry, Descent, and Landing (EDL).

The Mastcam-Z is powered by XQR2V3000-4CG717V, and as the name implies, this is a camera. The Mastcam-Z is a mast-mounted camera system that can zoom in, focus, and take 3D pictures and video at high speed to allow detailed examination of distant objects.

Last but certainly not least is SHERLOC. The XQR2V3000-4CG717V powering SHERLOC unit is yet another smart abbreviation. The Scanning Habitable Environments with Raman & Luminescence for Organics & Chemicals – SHERLOC and its purpose is the fine-scale detection of minerals, organic molecules, and potential biosignatures. Yes, it is what it seems to be, this is the part where Xilinx accelerates and helps to look for life forms and essentially aliens.

These are all data-intensive processing that were not possible with the last 2011 Mars Rover and the available hardware.

It is important to mention that these FPGAs are Radiation Tolerant (RT) using special Pin, packaging, and testing wrapped in robust ceramic packaging. They are radiation harden to enable better immunity in a harsh environment. That is a critical element of how the Mars Rover from 2011 still roams and sends data nine years later. 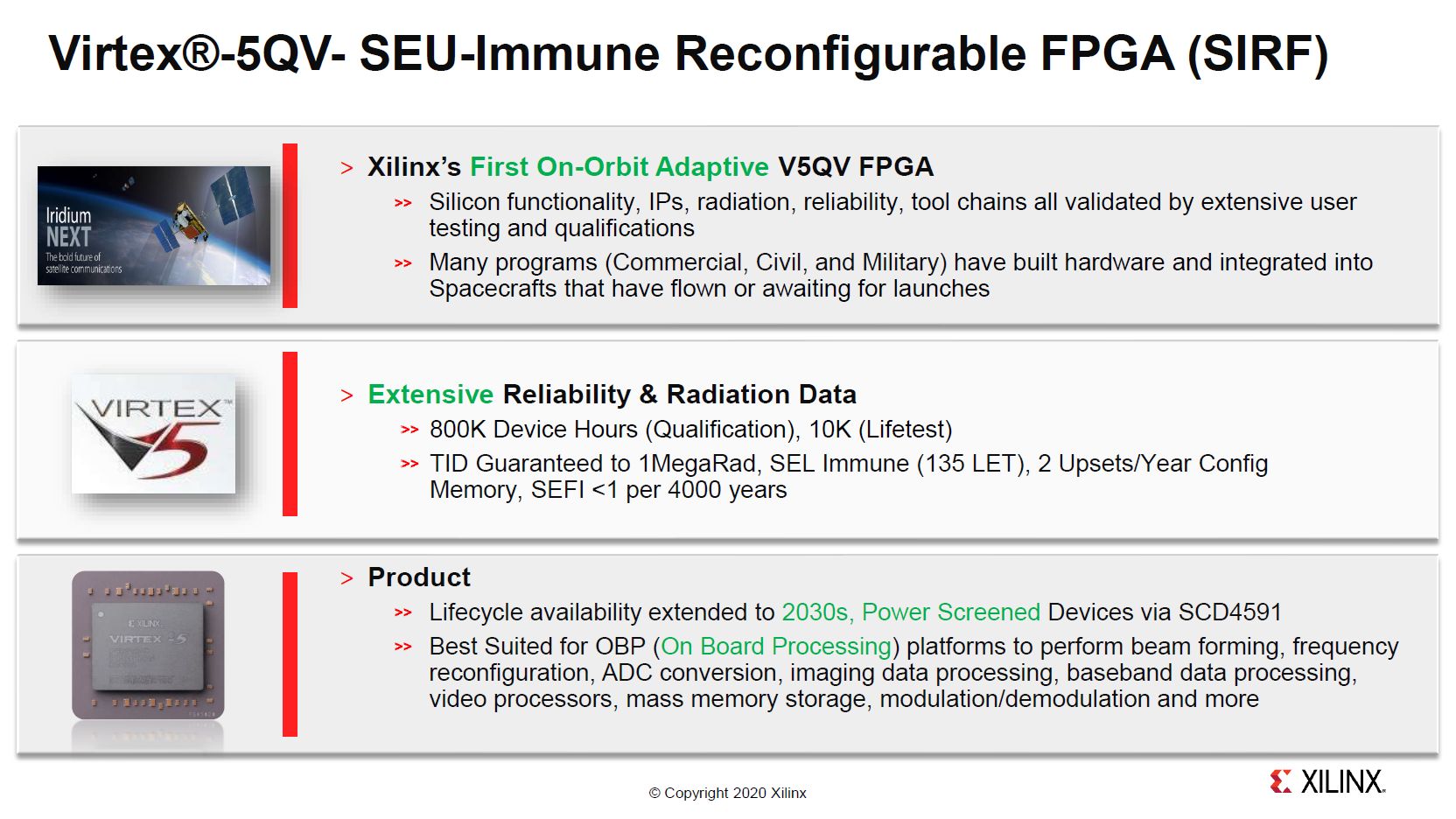 The above mentioned, FPGAs have to be rigorously tested as the failure is not an option; the lifetime of the device has to ensure that nothing will fail or reduce functionality. Part of the qualification is the extensive data by 800K device hours qualification and 10K live test.

The Virtex V5QV FPGA shows a glimpse in the future of space deployment as it is a part of many programs (Commercial, Civil, and Military) that have built hardware and integrated into Spacecrafts that have flown or awaiting for launches. Apart from the extensive reliability & radiation data testing that includes 800K Device Hours (Qualification), 10K (Lifetest), there is a certain level of radiation that these chips have to be able to handle. The TID is guaranteed to 1MegaRad, SEL Immune (135 LET), 2 Upsets/Year Config Memory, SEFI <1 per 4000 years.

We wrote a comprehensive part about the successor RT Kintex UltraScale that will find its way into future space exploration missions and vehicles.

Last modified on 31 July 2020
Rate this item
(2 votes)
Tagged under
More in this category: « Schmidt and Work want to train AI coders Chinese outfit sues Apple for more than a billion »
back to top