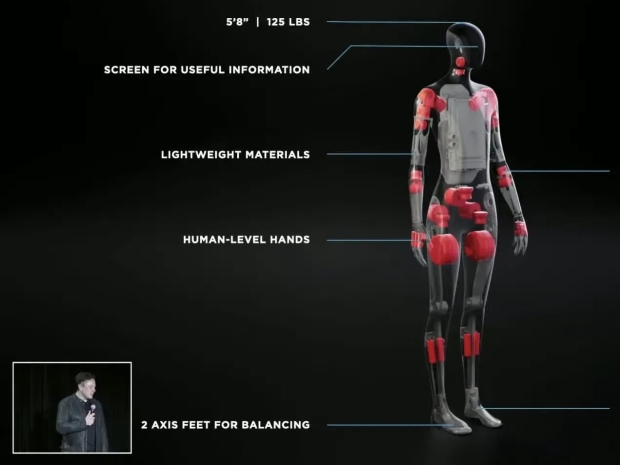 Elon [look at me] Musk is expected to unveil a prototype of his Optimus robot tommorrow which he tried to convince us last August would be a cheap robot which will be in every house and do mundane tasks.

At the time we joined many in expressing skeptism that the technology was there at all, let alone cheap enough for consumers. Musk claimed that the humanoid robot could handle “unsafe, repetitive or boring” tasks.

According to last year’s draft specs, the robot is supposed to be humanoid and bipedal, standing 5’8’’ and weighing 125lbs, with a carrying capacity of 45lbs and a walking speed of 5mph. Musk says the robot will use the same Autopilot cameras and software Tesla uses in its cars to navigate the world and will be capable of carrying out factory jobs currently left to humans. And it’ll be “friendly,” of course.

What amazes us is that the tech press seems keen to give Musk a pass on him being able to make a robot like this and assuming that he will some how create one.

For example, during the announcement of the Tesla Bot, Musk said the robot will be able to follow instructions in the real world. “It should be able to, you know, ‘please go to the store and get me the following groceries,’ that kind of thing,” he said, before adding: “So, yeah, I think we can do that.”

He claims that his Tesla Bot will be in the shops in “less than 10 years” to help around the house and it would cost less than a car.  Like most things Musk it was hyped and vague.  He did not say, for example what sort of car.

But what we expect to see tomorrow is a walking humanoid robot, which probably answers to voice commands and has some gimmick which will allow Musk to leave the stage with his fanbase intact.

However walking robots are not new, neither are ones which can take instructions, pick up objects from the stage.  The real test, though, will be manual dexterity — how well the bot can manipulate objects in an unstructured environment. This will be the skill that allows it to take on the burden of human work in Tesla’s factories, as Musk has promised, and would set it apart from the current generation of industrial robots. These bots are very good at moving objects around quickly and accurately but only when their working space is mapped in advance.

Don't hold your breath for that one

Last modified on 30 September 2022
Rate this item
(6 votes)
Tagged under
More in this category: « UK robotic expert says AI is our friend Bruce Willis did not sell the rights to his face to the Russians »
back to top