It was only a matter of time before the Asus ROG Crosshair V Formula motherboard appeared online and it looks like at least some AMD Bulldozer CPUs will be quite happy to run on this motherboard. Featuring the quite recognizable black/red color scheme, the new Crosshair V Formula comes with all the ROG goodies that you would expect to see on an enthusiast line motherboard.

The motherboard is based on AMD's upcoming 990FX chipset paired up with the SB950 southbridge and a full support for AMD AM3+ CPUs. It features a 10-phase VRM, four DDR3 memory slots, a total of seven SATA 6Gbps and one eSATA port, four PCI-Express x16 slots with support for both Nvidia's SLI and AMD CrossfireX, Gigabit Ethernet, onboard 7.1-channel audio, six USB 3.0 ports (two via header) and a bunch of USB 2.0 ports.

It is interesting to note that the new Crosshair V Formula motherboard will be available in two versions, with or without the so called Thunderbolt add-on card that brings Xonar audio and Bigfoot Networks Killer NIC to the play. Of course, as a member of Asus' Republic of Gamers series it will pack on board Power, Reset and Clear CMOS buttons, ROG Connect, voltage measure points and all the other ROG goodies. 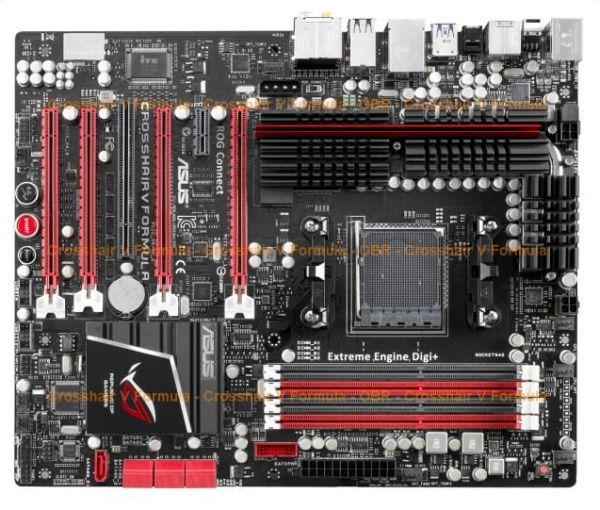 Last modified on 25 May 2011
Rate this item
(21 votes)
Tagged under
More in this category: « Two Gigabyte Llano boards pictured, detailed Intel's highest end Sandy Bridge E board is Siler »
back to top