Socketed AM1 platform will be dirt cheap

Earlier this week AMD launched the AM1 platform, which is basically comprised of Kabini-based socketed SoCs and cheap Socket FS1b motherboards. The company said the motherboard and APU combo should end up on the cheap side, starting at an estimated $60. You can check it out here.

However, hardware companies tend make all sorts of vague pricing promises at launch and the truth is they don't materialise every time. The fact that AMD did not reveal any socketed Kabini parts did not help, either. A socketed entry-level platform starting at $60 sounds like a great deal, as integrated motherboards with E-series APUs and Intel Atoms tend to be similarly priced.

Yesterday Asus announced two AM1 boards, but it didn't reveal much info on pricing, so the equation looked a bit like this: x + y =$60. Now though the Asus boards have popped up in European price search engines and they are indeed dirt cheap. 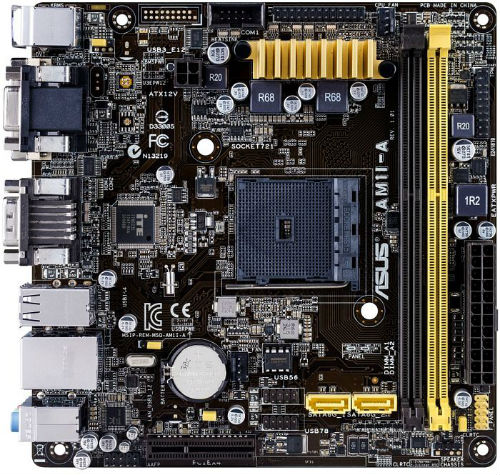 The Asus ASUS AM1M-A and ASUS AM1I-A are listed for as little as €28. This is not the official price, but it looks like the MSRP is around €29/$29. This is not very surprising, as we are talking about SoC boards - all the brains are in the Kabini chips, not the boards.

So, in order to hit the $60 mark AMD's cheapest socketed Kabini will have to cost around $30. This shouldn't be much of a problem for AMD. The company's cheapest socketed CPUs currently sell for $36 to $40 - and we are talking about relatively big Trinity dual-core chips like the AMD A4-4000 APU, which is priced at $40.

AMD wasn't exaggerating - consumers should be able to pick up an AM1 combo for as little as $60. The entry level part will be the Sempron 2650, a dual-core clocked at 1450MHz. It is not official yet, so we can't say for sure, but AMD is reportedly planning to sells socketed Kabini parts for $30 to $55. Even the top A6-5350, which is said to feature four Jaguar cores clocked at 2050MHz, should cost $85 with a motherboard in tow.