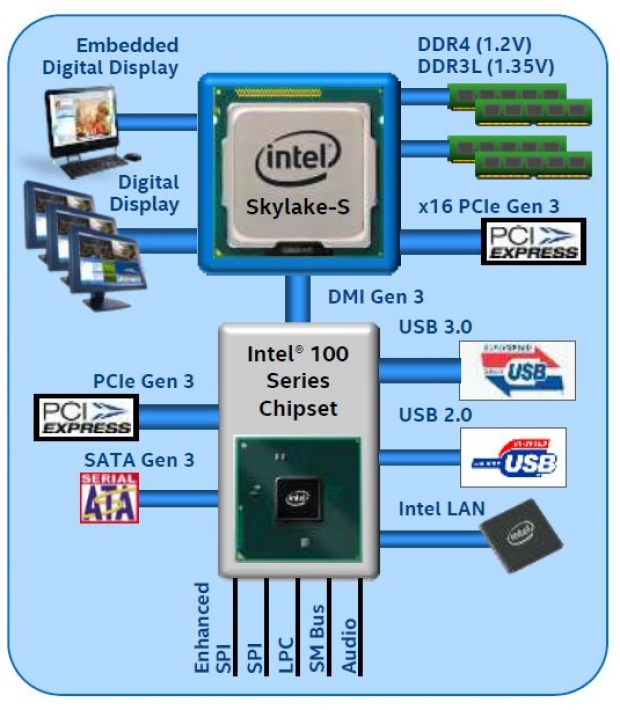 For those who came in late, Intel has a Tick - Tock strategy happening for the last few years, although lately there has been more tocking than ticking.

Broadwell didn’t make it to the desktop and it never will, unless you call Small form factor NUC like machines a desktop.

Skylake is bringing a few new things to the performance market. The new socket doesn’t surprise anyone and it is called LGA 1151, has just one pin more than Haswell.

The chipset is codenamed Sunrise Point and should work for the Skylake generation of processors and the 2016 Cannonlake Tick, It has 20 x PCIe 3.0, DMI 3.0 (4x PCIe 3.0) connection between CPU and the chipset. The number of SATA 6 G-bit ports remained six but the number of native USB 3.0 ports grew to 10, from 6 in Z97 Haswell chipset. Skylake supports both DDR3 and DDR4 memory and there will probably be boards for both memory interfaces.

Z97 boards had a single M.2 / SATA express port for the new format SSDs and the new Z170 will come with three of them. You will be able to plug up to three M.2 / SATA express drives in the motherboard. We are not sure that you need that many, but we would be happy with two.

Kingston's Predator M.2 drives  are expected to launch in this month, February with the help of Marvell’s X4-lane PCIe SSD Controller 88SS9293 it can hit speeds over 1500MB/s read and around 1000MB/s write. We saw them in action  at CES 2015 and we expect many similar drives from the competition to boost already faster SSD 6 G-bit SATA connected drives.

Last modified on 03 February 2015
Rate this item
(4 votes)
Tagged under
More in this category: « NUC getting Core i7, Skylake too Linaro offers new ARM board designs »
back to top