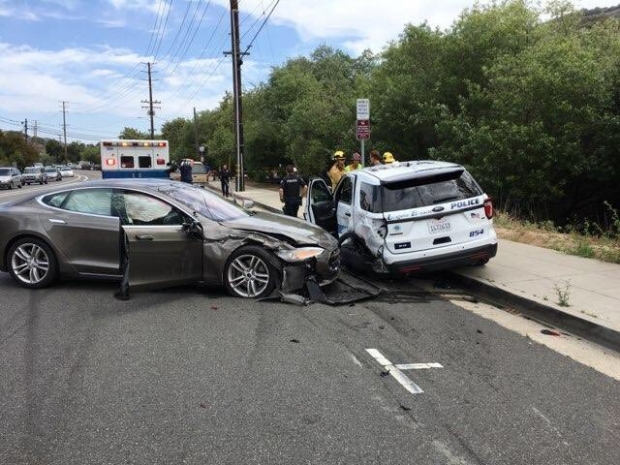 A Tesla car on Autopilot mode has crashed into a parked police car in Southern California.

Police Sgt. Jim Cota says the officer was not in the cruiser during the crash in Laguna Beach. He says the Tesla driver suffered minor injuries. The police SUV ended up with its two passenger side wheels on a sidewalk.

“Instead of driving in the roadway, it veered off. The 2015 sedan was traveling in the 20600 block of Laguna Canyon Road near the city’s homeless shelter when it hit the parked police vehicle."

It is still unclear why the Tesla sedan veered and struck the police SUV which was totalled, Cota said. Maybe it thought it saw Sara Conner. The crash remains under investigation.

Tesla's semi-autonomous Autopilot mode has been hitting the headlines lately after recent crashes. The carmaker says the function is not designed to avoid a collision and warns drivers not to rely on it entirely.

Last modified on 30 May 2018
Rate this item
(0 votes)
Tagged under
More in this category: « Elon confirms Model 3 to arrive in Europe 1H 2019 Three million electric cars rolling around worldwide »
back to top