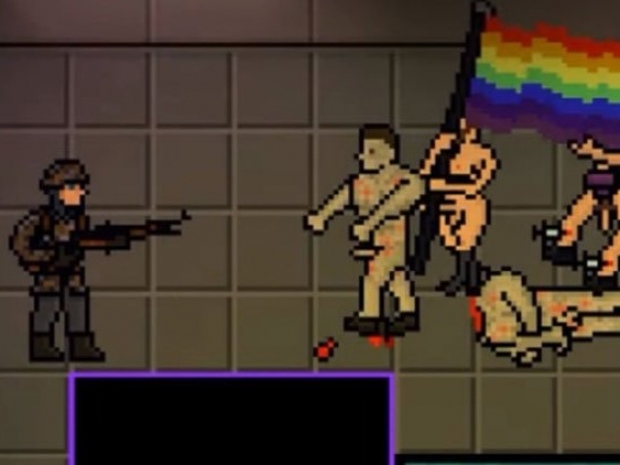 A new computer game that allows you to slaughter gay men, Jews, minorities and journalists while protecting Donald (Prince of Orange) Trump is out..

Bnow.acked by Christopher Cantwell, the white supremacist infamous for his role in last year's far-right rally in Charlottesville, Angry Goy II, available to download on the website for Cantwell's Radical Agenda podcast.

The game allows users to play as Cantwell or fellow alt-right figurehead Richard Spencer itosave President Donald Trump, who has been kidnapped by “left-wing terrorists”.

One of the game’s levels involves shooting people inside a gay club called “LGBTQ+ Agenda HQ” and recreate the Pulse nightclub mass shooting in Orlando, Florida, in June 2016 when 49 people were killed.

Another mission involves killing journalists inside the offices of the “Fake News Network," a reference to the term Trump uses to attack media organisations such as CNN.

Of course, it is Cantwell we are talking about here who famously blubbed when he discovered he might be arrested in the wake of the deadly Unite The Right rally, has been promoting the game on his podcast’s web page.

It does also mean that while White Neo-Nazi nut jobs are playing the game ,they are at least not doing the real thing.

“Angry Goy II is the season’s hit game for White males who have had it with Jewish bullshit”, Cantwell wrote.

“Instead of taking out your frustrations on actual human beings, you can fight the mongrels and degenerates on your computer!”

Cantwell is also plugging it on social media site Gab, the infamous platform used by the far-right which was temporarily shut down after it was revealed the alleged Tree of Life Synagogue gunman posted on it before killing 11 in Pittsburgh.

A spokesperson for the charity Community Security Trust, which fights anti-Semitism, said: “It may sound like a pathetic example of race hate, but this is actually a deep incitement to commit murders inside gay clubs, synagogues and other targets far-right hatred. We are all familiar with the reality of mass shootings at such locations, which makes this so-called game even more dangerous and stomach turning.”

The game, which is attributed to “Wheel Maker Studios,” is a sequel to the original Angry Goy game that appeared online last year.

The game featured a neo-Nazi who decides to murder black people, Jews and refugees after hearing how “six million” immigrants have arrived in Europe.

YouTube has banned a promotional video for the game because it breaches its race hate policies.

The graphics and gameplay is somewhat limited because it has been designed by, and for the use of those, who lack opposable thumbs.

Last modified on 16 November 2018
Rate this item
(0 votes)
Tagged under
More in this category: « Sony celebrates Playstation 4 5th anniversary Disk Free Xbox out in spring »
back to top