Cyberpunk 2077 to be on Geforce Now at launch 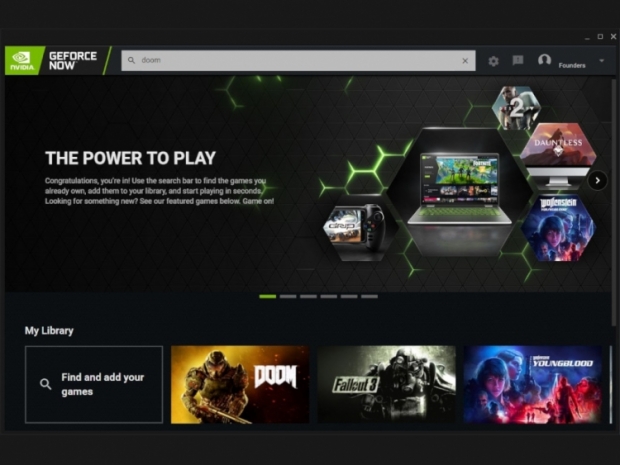 Nvidia has confirmed that CD Projekt Red's Cyberpunk 2077 will be available on Geforce Now the day it is released, which is great news for the service and was expected with the recent launch of limited edition Nvidia Geforce GTX 2080 Ti Cyberpunk 2077 Edition graphics card.

Nvidia scored some big points with Geforce Now and while Activision Blizzard might have pulled its own titles, it appears that Nvidia will deliver on its promises and support for many other games is coming to the service.

We had a chance to check out Geforce Now earlier and with Free and a $4.99 Founders options, it ticked all the right boxes, especially with a model that allows you to play most of the games you own and it is available on Mac OS, Windows OS PCs, Android devices, and Nvidia's own Shield.

Now, Nvidia has confirmed that CD Projekt Red's Cyberpunk 2077, one of the most anticipated RPG titles, will be coming to Geforce Now as of day-1. Nvidia was also keen to note that Cyberpunk 2077 will support RTX effects for Geforce Now Founders, so it will be interesting to see how ray-traced Night City looks with RTX effects on other devices.

The addition of Cyberpunk 2077 to Geforce Now list is a great move from Nvidia and will users to experience the game with RTX effect even without Geforce RTX series graphics card, although limited to 1920x1080 at 60FPS.

Nvidia is currently promoting Cyberpunk 2077 launch, set for September 17th, with its own limited edition Geforce RTX 2080 Ti Cyberpunk 2077 Edition GPU, and even hosts #RTXOn Sweepstakes where you can win one.

Last modified on 21 February 2020
Rate this item
(0 votes)
Tagged under
More in this category: « Activision Blizzard games should not have been on GeForce Now Nvidia Geforce Now has over one million registered users »
back to top