We stopped by MSI’s booth at CES yesterday afternoon where we were greeted by two gentlemen who proudly demonstrated the company’s latest achievements in high-end GPU performance on the 40nm process belonging to the Radeon HD 5000-series by AMD.

MSI’s flagship enthusiast-catered accomplishment comes in the form of the Radeon R5870 Lightning based on the 40nm “Cypress” DirectX 11 core from AMD. This particular GPU is built on a 10-layer printed circuit board and features a jaw-dropping 1000MHz core speed, a 15-phase digital PWM design and two 8-pin PCI-Express 2.0 power connectors for incredible overclocking capability and performance. In addition, the card incorporates the company’s latest and greatest in heatsink innovation which it calls “Twin Frozr II thermal design with SuperPipe technology.” 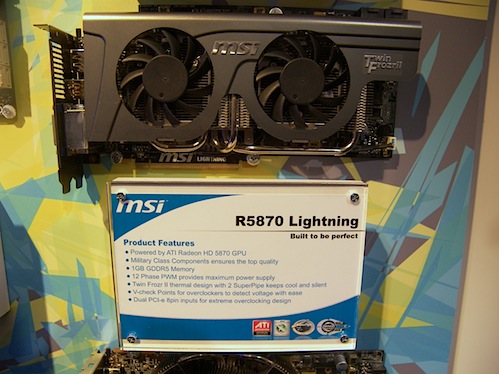 The Twin Frozr II design is equipped with two large 8cm fans, 5 heatpipes, and high-density fins to effectively dissipate heat from the GPU core, memory chips and PWM area. MSI even states that the board is applied with “Military Class” components – SSC, Hi-c Capacitors, and Solid Capacitors – making the Radeon R5870 Lightning the best choice for maximum overclocking.

The company has simultaneously previewed its Radeon R5850 Cyclone based on the 40nm “Broadway” DirectX 11 core from AMD. This particular GPU features a single extra-large 9cm fan that has the ability to generate half of its rated noise with ultra-low RPM mode enabled. In effect, the R5850 Cyclone gives users silent a working environment and overclocking capability. MSI states that this board is also applied with “Military Class” components – SSC, Hi-c Capacitors, and Solid Capacitors – offering exceptional stability and a solid lifetime. 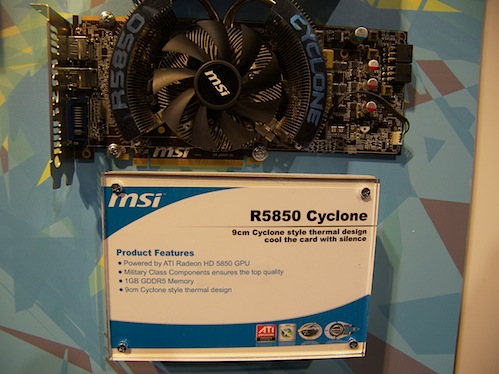 The company did mention to us that these cards were only on display during the show, but they should be launching within the next month. Pricing is unknown, but we will have more information when it becomes available.