After treating us to a sneak preview of its new Radeon HD 6870 Eyefinity 6 Edition graphics card, Powercolor has now officially announced it.

The specs are pretty much what you would expect from the HD 6870 card so you are looking at a Barts XT GPU with 1120 Stream processors. The GPU ticks at 900MHz while the 2GB of GDDR5 memory paired up with 256-bit memory interface works at 4200MHz. It is good that Powercolor decided to strap it with additional 1GB of memory due to the fact that higher resolutions usually need more memory. The I/O panel offers six mini DisplayPort outputs.

The card is cooled by Powercolor's dual-slot non-reference cooler with a central fan and the card needs two PCI-Express 6-pin connectors. The price or the availability date haven't been announced but we are sure that the card will show up in retail/e-tail pretty soon. 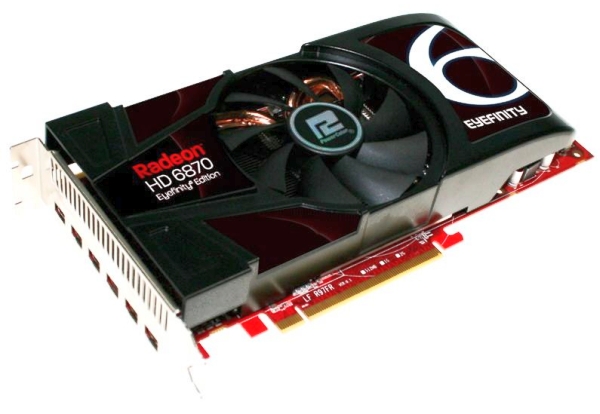