The new king of the hill

The new Radeon HD 6990 works at 830MHz for the GPUs, has a 2x256-bit memory interface and 4GB of GDDR5 memory clocked at 5000MHz. Once again, AMD decided to include the BIOS switch that takes the card up to 880MHz for the GPUs. According to the AMD spec sheet, the card has a 375W TDP as it needs two 8-pin PCI-E power connectors.

AMD suggests a 750W+ power supply or a 1000W+ one in case you want to run two of these for some CrossfireX action. The backplate features one DVI and four mini DisplayPort outputs. There is nothing to worry about as every single card will ship with adapters for two more DVIs and one HDMI output.

In order to cool down the GPUs, AMD opted for a dual heatsink cooler that is cooled by a single, central blower fan. According to the first reviews, the cooler keeps the card at reasonable temperatures and it doesn't make that much noise. The price, something that hasn't been talked about that much, is set at US $699. If you think that this is a bit steep, however, just bear in mind that we are talking about the performance king.

Some reviews have already gone up and here are some of them: 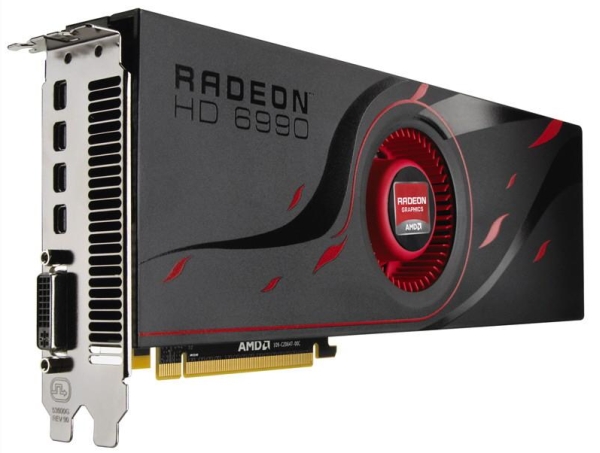 Last modified on 08 March 2011
Rate this item
(34 votes)
Tagged under
More in this category: « Powercolor officially launches HD 6870 Eyefinity 6 Partners line up for HD 6990 launch »
back to top