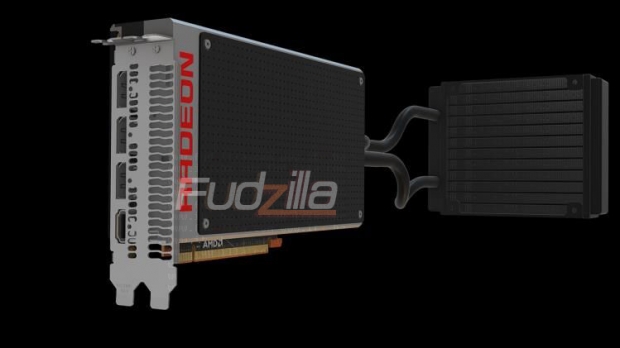 We saw how the Fiji XT card looks. AMD shared some data and the dummy cards with its partners who wanted to examine the custom cooling.

Fiji XT card features quite large GPU surrounded by four memory chips. This is nothing that surprised us, as we have been saying this for a while. The GPU with interposer measures 55mm x 55mm,while the card length is around 190mm or 7.5 inches.

In late April, we mentioned that the card will end up shorter than traditional high end cards. For reference, the Radeon R9 290X measures almost 11 inches or 279 mm in its short iteration, and with custom coolers it expands to 305 mm or 12 inches. The Geforce GTX 980 TI is 10.5 inches / 266 mm long.

There is a catch, as the Fiji watercooler is not on the card. It adds additional length but it usually mounts above the card, in a designated place in your chassis. It should fit most 120mm fan mounts that every gaming case has.

The Fiji XT comes with 4GB memory and we hear that the dual-chip card is still in works and will come with 8GB. You should see this card as two times 4GB for each HBM1 powers GPU. The dual-GPU version that is aiming the Virtual Reality and Crossfire high performance market should ship bit later.

Fiji XT (we intentionally don't use other names including Fury or Fury X as we cannot confirm that ed.) has three DisplayPort and a single HDMI 2.0 connector. Of course, the card supports FreeSync as this is a technology AMD is proud of and it will do well with DirectX 12 too. AMD showed us even the demo of the previous generation card having FreeSync via HDMI and Fiji should come with that support too.

We heard about the water cooler quite some time ago, but this was the first time we saw it. We believe that there will be at least two versions of the card, one of which will ship with a water cooler, but we would not rule out an air cooled card too. We know that the 8GB Fiji VR is in works and this is the only one we can confirm.

The card is two slots wide in both cases and we expect to hear more at AMD's gaming event that takes place in Los Angeles where we expect that the company will finally release Fiji XT to the word. Event is taking the place on the June 16th and we expect reviews to come a bit later than that.

Last modified on 08 June 2015
Rate this item
(10 votes)
Tagged under
More in this category: « Geforce GTX 970 issue destroyed sales in February Chipzilla kills the Penguin »
back to top