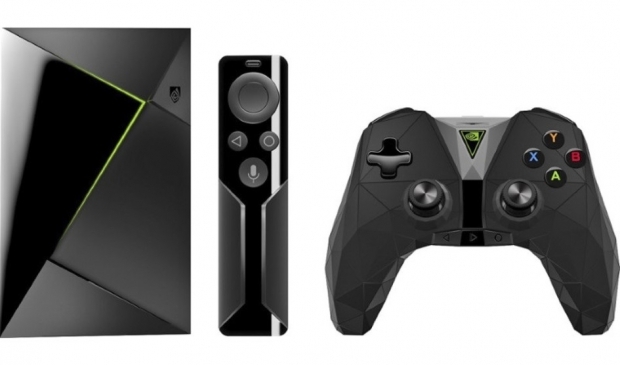 Nvidia has announced a new and smaller version of its SHIELD TV console and Amazon.de decided to offer them for pre-orders and reveal the pricing.

NVIDIA SHIELD TV 16 GB comes with a remote and games controller and it is up for pre-orders. Amazon wants Eur 229.99 for it and you can pre-order one today. The console, according to Amazon, will launch and ship on January 16 for the German market.

The new console includes stream gaming support, the same hardware as the 2015 original SHIELD TV console, but it comes with updated software to support home automation via Google Home as well as Amazon Prime. If you own a 2015 SHIELD TV console, you should be getting the new software rather soon, as soon as Nvidia releases the 2017 console. At this pace this could happen by next Tuesday.

The SHIELD TV Pro 500 GB is called a media streaming device and it also includes the remote as well as the SHIELD gaming controller. This  will launch on January 30 and it is already available for pre-orders. Nvidia wants Eur 329.99 for the SHIELD TV Pro 500 GB which is definitely  a high premium for adding an inexpensive 500 GB hard drive inside. Nvidia likes its excessive margins that end users always get to pay, nothing has changed in the last 18 years since we started covering news about this company.

The fact that very few have picked up is that the 2017 SHIELD TV uses the Tegra X1 processor with a 256-core GPU and 3 GB of RAM, a rather old SoC and not the Tegra P1 SoC launched last year. Tegra P1 will go to Nintendo Switch and we can only assume that Nvidia didn’t want to challenge Nintendo’s console with superior hardware.  The Tegra X1 bypassed the tablet market as its TDPs went reportedly to 10 to 15W, which was simply too much for a tablet. Back in summer time last year,  Nvidia canceled the SHIELD Tablet based on Tegra P1 quoting a "business" reason.

The Tegra T210 inside of the SHIELD TV 16GB uses four Cortex-A57 + four Cortex-A53 in 20nm and 256 Maxwell cores. This doesn’t sound that great in a time when all mobile and desktop GPUs are based on the much superior Pascal architecture. Tegra T1, previously known as Erista, son of Logan was launched two years ago, which in the SoC world is a very long time.

Since Nvidia is using its own SoCs, it was their decision to make, and I guess if someone launched a console based on Snapdragon 835  that could potentially give SHIELD run for its money.

Last modified on 10 January 2017
Rate this item
(0 votes)
Tagged under
More in this category: « AMD releases Crimson Edition ReLive 16.12.2 WHQL drivers Alienware 13 OLED is great for gaming »
back to top