Nvidia pulls Titan V out of its hat 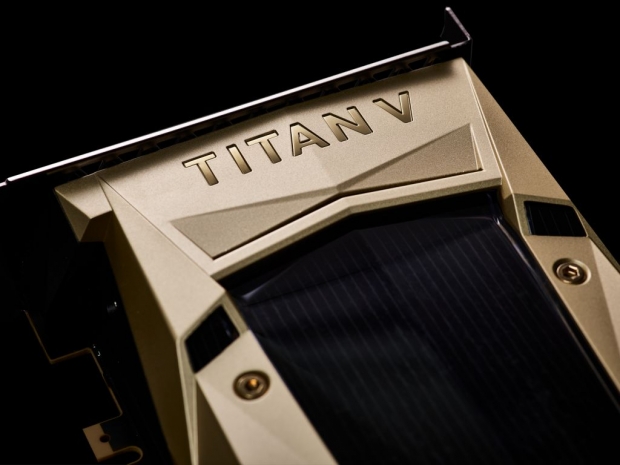 Nvidia has rather surprisingly announced and launched the new prosumer Nvidia Titan V graphics card at the Neural Information Processing Systems 2017 conference, which is based on a fully-enabled GV100 GPU and available for $2,999.

Unveiled and showcased by Nvidia's CEO, Jen-Hsun Huang, on stage at the show, the Nvidia Titan V is all about compute performance with its fully-enabled GV100 815m2 GPU with 21.1 billion transistors, built on the 12nm TSMC manufacturing process. This is the same GPU that was in the Tesla V100 announced a couple of months ago.

According to the specifications available on Nvidia's product page, the GV100 GPU behind the Titan V has all six Graphics Processing Clusters (GPCs) or 80 Streaming Multiprocessors (SMs), for a total of 5120 CUDA cores and 320 TMUs. It also packs 4608K L2 cache and 12GB of 1.7Gbps (850MHz) clocked HBM2 memory on a 3072-bit memory interface. The GPU ticks at a base clock of 1.2GHz with 1.455GHz Boost clock.

The TDP is set at 250W, which has become a standard for Nvidia Titan cards. The PCB has a 16-phase VRM which draws power from a combination of 6-pin and 8-pin PCIe power connectors. It also features standard three DisplayPort and one HDMI output configuration.

As it features the fully-enabled GV100 GPU, the Titan V also comes with 640 Tensor Cores, delivering over 100 TFLOPs of deep learning performance, something that Nvidia has been pushing quite hard recently. The compute power of the Titan V should be similar to the Tesla V100, hitting at just under 14 TFLOPs single-precision and 7 TFLOPs of double-precision compute performance.

Strangely, Nvidia Titan V does not come with NVLink or SLI as it both lacks the support and the actual NVLink connector is blocked with a cooler. Speaking of coolers, Nvidia used its standard vapor chamber cooler with a copper heatsink and blower-style fan. This time around, it has a gold-colored shroud.

Unlike the consumer-oriented Titan X and the Titan Xp, the new Titan V is all about compute performance and with a price set at US $2,999, it could be a popular solution for researchers and scientists looking to use that AI/ML power of the Volta GPU.

Last modified on 08 December 2017
Rate this item
(0 votes)
Tagged under
More in this category: « AMD admits hobbling Radeon RX 560 Intel might be preparing to off Nvidia »
back to top