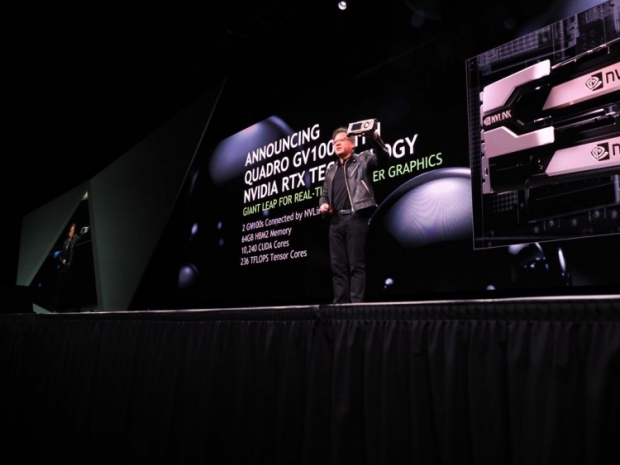 Toni Tamasi, senior vice president of content and technology at Nvidia, has confirmed to Fudzilla that we can expect games with Ray Tracing this year.

Ray tracing has been the holy grail of graphics and was always a better quality alternative to rasterization. Ray Tracing simulates the physical properties of light including reflection and refraction, scattering, and dispersion and propagation. It is computationally very intensive and this was the main reason why it was dominating realistic, offline rendering.

Hollywood uses this as well as designers and artists but to calculate all the possible trajectories and bounces of the light rays, it sometimes takes hours for a single frame.

Jen Hsung Huang, the CEO and founder of Nvidia calls Ray Tracing the biggest leap forward since the invention of Shaders. This is the biggest thing in graphics for the last 15 years.

The games that Tamasi mentions are not going to be completely Ray Traced, it is just too early for that. It is expected that the combination of traditional shader/rasterization approach will be helped with some Ray Tracing. The general idea is to use Ray Tracing when needed and when it matters as they are computationally very expensive.

Without being much specific, since we've already seen the Star Wars demo, this might be a valid expectation but of course, Nvidia doesn’t want to announce anything for its partners. The demo was rendered live at the GTC keynote on four Volta-based graphics cards.

The era of Ray Tracing gaming is about to start. One more thing, we would expect that the next generation Geforce has a great acceleration for Ray Tracing through Microsoft’s new DirectX Raytracing API and in the future Vulkan. This is what has been announced for the Quadro GV100 with NVIDIA RTX technology and will likely be the same model for the Geforce part.