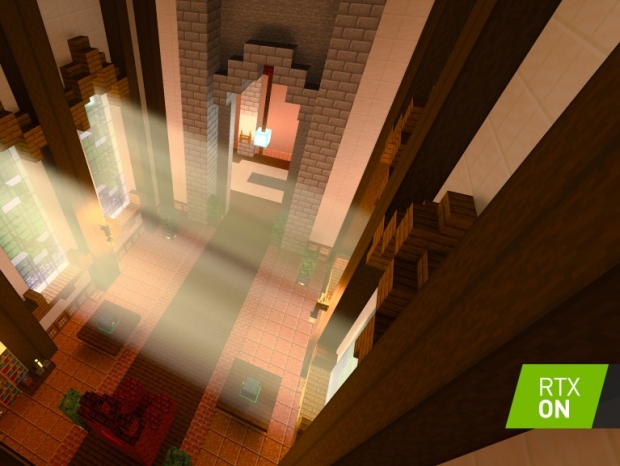 Microsoft and Nvidia are releasing Minecraft with RTX in beta on April 16 which adds ray-tracing effects like lighting, reflections, shadows, and more. And this is potentially the next generation for Minecraft visuals.

Nvidia and Microsoft began pushing raytracing in 2018 with the RTX graphics cards and DirectX Raytracing.

All their efforts have been ignored by developers and publishers who seem to have been adopting it at a glacial pace. Nvidia and Microsoft developed the game together, and they are finally ready to let everyone see it for themselves. You can get the game by opting into the beta for the Minecraft for Windows 10 version.

Nvidia and Microsoft updated the game with physically based materials. This enables the RTX light rays to correctly bounce off objects. A green block will add a green tint to any reflected light, for example. And water will bend light and reflect the world behind you in its surface. These visuals were often too complicated for traditional lighting techniques.

Ray tracing has a detrimental effect on performance. Nvidia used its DLSS technology to achieve “playable framerates”. DLSS is deep-learning super-sampling. It uses machine learning to determine what a game should look like at an ultra-high resolution. DLSS can then take that data and rebuild an image from significantly less visual information. This enables a game to run at 1080p while generating an image that looks indistinguishable from native 4K.

You will need an Nvidia RTX card to get anything close to a playable framerate from Minecraft with RTX.

More in this category: « Nvidia releases its 445.87 WHQL Game Ready driver Nvidia GA100 is a high-performance AI »
back to top