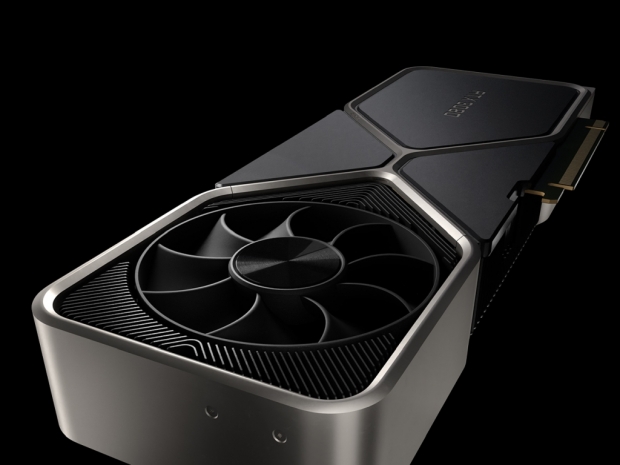 Review roundup: Reviews are out with nothing but praise

The review NDA for Nvidia Geforce RTX 3080 Founders Edition has been finally lifted and reviews have gone online showing just how much raw performance is behind Nvidia's new $699 priced flagship graphics card.

The reviewers, those that had no trouble in getting a review sample in time due to COVID-19, mostly have nothing but praise for Nvidia's latest flagship card. Benchmark results places it on top of review charts, at least until the BFGPU Geforce RTX 3090 launches in a week time.

In case you missed it earlier, the Geforce RTX 3080 is one of the first three Geforce SKUs based on Ampere architecture and its GA102 GPU brings a total 8704 CUDA cores, 96 ROPs, and 272 TMUs, offering 29.8 TFLOPs of compute performance. The new Ampere architecture also brings 2nd gen RT cores as well as 3rd gen Tensor cores, which means that it should handle ray-tracing and DLSS much faster, especially with the new DLSS 2.0.

The novelty is the new 12-pin power connector which is actually an adapter for two 8-pin PCIe, that should give it enough juice to handle 320W TDP.

W1zzard from Techpowerup.com went all out showing the Geforce RTX 3080 performance in a couple of different scenarios, comparing performance with Ryzen 3900XT and Intel Core i9-10900K, as well as looking into PCI-Express scaling, so those are worth checking out as well.

In any case, Nvidia has started a new chapter and has an upper hand for now, and we are eager to see the $1499-priced RTX 3090 performance on September 24th. More importantly, the $499-priced Geforce RTX 3070 which comes on October 15th should be quite an interesting card and one to look for in case you are not going for 4K/UHD or 1440p at 144+Hz.

Here are some of the published reviews.