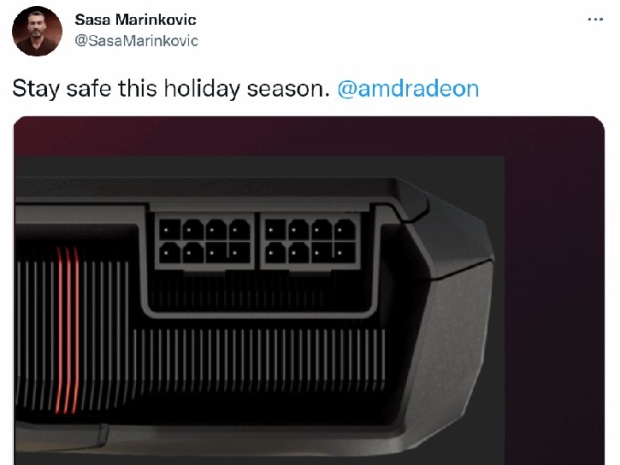 Sasa Marinkovic, the marketing director for AMD's gaming group has been taking the Mickey out of Nvidia for its incredibly overheating connectors.

As one of the few remaining Twitter users, Marinkovic sent a picture of a power connector for an AMD Radeon graphics card, which featured two 8-pin pegs. And he adds the words "Stay safe this holiday season" to the message.

For those who came in late, he is referring to the molten 12VHWPR adapters and connectors found on Nvidia's GeForce RTX 4090 and 4080 GPUs. Nvidia claims that it is the user's fault claiming that overheating and melting "occurs if the 12VHWPR plug was not inserted correctly."

While that might be true, other users have pointed out that it seems to require rather a lot of force to get the connection right and many of them are worried about breaking their boards.

AMD has confirmed that the recently announced Radeon RX 7900 XT and XTX will continue to use the existing peg power connector.