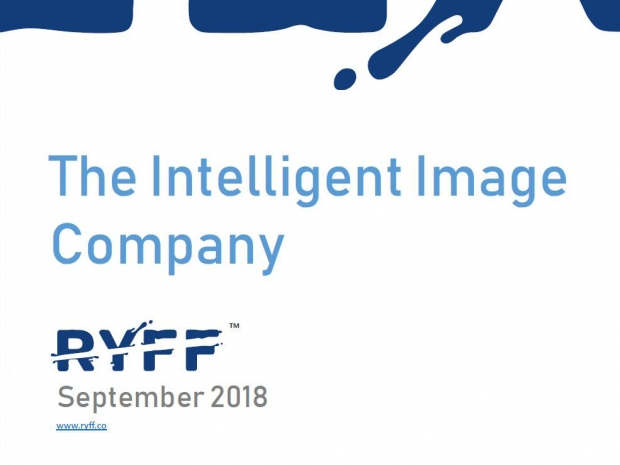 Unreal Engine for render in videos

There is a new company called the Ryff and a few industry veterans dared to change the product placing market introducing a realistic rendering. Instead of remaking the video for every single market or target audience, they decided to use 3D rendering to replace the existing objects in the video.

The CEO of the new company is the industry veteran Roy Taylor who worked at Nvidia as developer relations VP and was running sales in Europe and also worked at AMD as a senior executive and key responsible for AMD studios in Hollywood. The emphasis is on real-time manipulation of products, people, backgrounds and images in live or pre-recorded video.

Evan Smyth the CTO worked for DreamWorks animation as software architect as well as Sony Pictures Imageworks as a principal software engineer.

Mark Turner is the Chief operating officer and was a VP of corporate strategy and partnerships at Technicolor, Director of content relations at Dolby as well as part of Microsoft’s entertainment and media group.

Spencer Stevens CSA was a CTO of Sony picture entertainment, lead technologies at Warner Brothers and head of technology and digital production at Disney TV animations.

One can easily see that the leadership team gathers exceptional talent mix who knows the Hollywood, production, relationships as well as the computer and graphics.

The principle is really uncomplicated, the Ryff software can identify and replace an object in a real video and will render and replace it in an existing video. The software with help of the render farm and Unreal Engine can remove objects and render completely different item based on the viewership or country.

So instead of extremely expensive re-shooting the video, Ryff product called the Placer can for example replace a bottle of wine with another brand that is targeted for Italian, France or the UK market and have the different brand for US viewers. If they want to show the same content in some countries where wine is no go, like many at the middle east, the wine can be replaced by coca cola or even a serial if they target a young audience. Coke, cookie box and the bottle of wine are rendered and placed in the video. 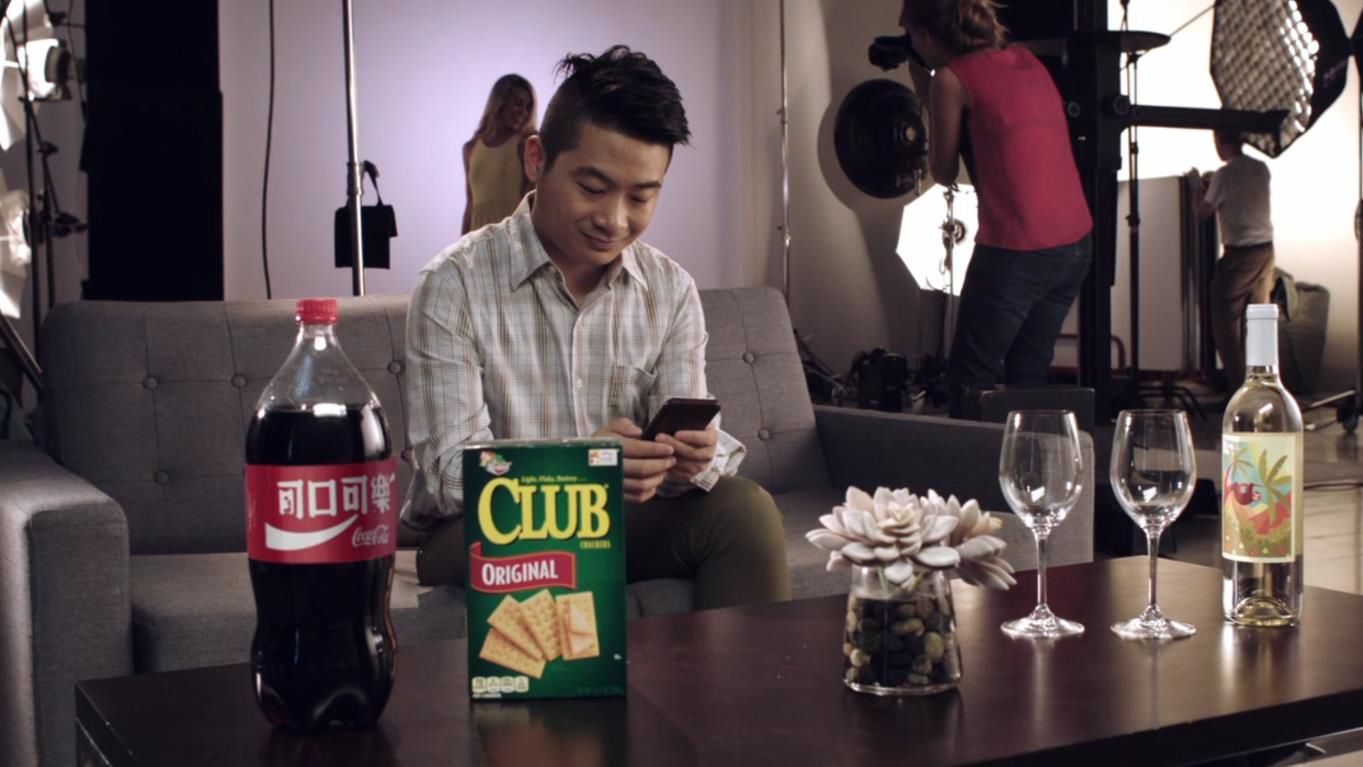 Done in real-time to different viewers Placer considers narrative, product placement and measured consumer behaviors when making its changes. For example, a Coke can on a desk can be replaced with a Pepsi can in a live TV show, based on user behavior and preferences; or an antiquated mobile phone could be replaced with a state- of-the-art iPhone XS or a Google Pixel for Android fans.

Another, probably even more interesting used case will be the live video. There is a demo on the company website who the producers of the Big brother or any other reality TV can actually do product placement on the fly even on live video. This will definitely be interesting for a lot of live TV reality shows. Imagine if Kardashians get their hands of this!

We had a chance to talk with the head of PR and marketing and later with the CEO itself to help understand the new company. Roy informed us that they will be using the Unreal Engine, something that many reading this part should be familiar with. The Unreal Engine is mostly used for games but it is also used for very realistic rendering too. Roy believes that this is the best engine for the task and the fact that it can replace the object and render the right pixels even on a live TV.

Roy and the team met with Tim Sweeney who was very enthusiastic and incredibly supporting about Ryff technology. Well’ having your best engine associate with something that can potentially change the product placement in Hollywood is not a bad PR after all. Roy added that they believe that the Unreal Engine is the best engine in the world. 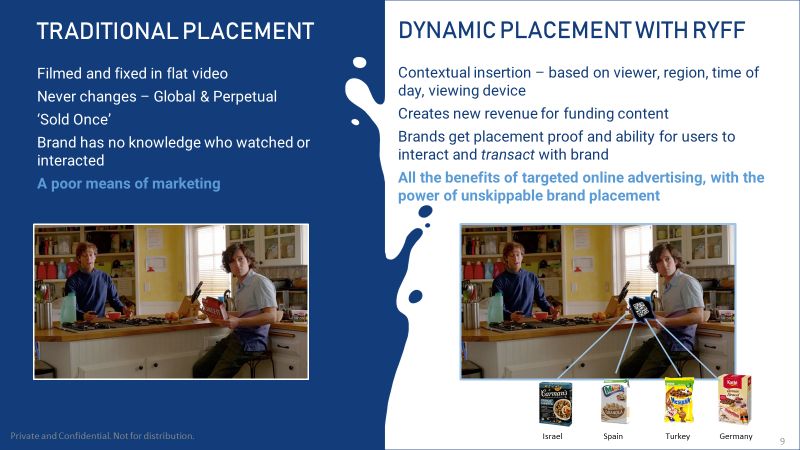 Interesting enough, Roy went on the record and said that Nvidia CEO Jen Hsung Huang keynote at Siggraph 2018 was almost like a trailer for what Ryff is doing.  Roy and the rest of the Ryff see a lot of potential in realistic rendering using ray tracing and mixed rasterization with ray tracing. Nvidia with its Quadro and Geforce RTX is all over ray tracing as this was and still is the holly grail of graphics. Using ray tracing for products in Ryff videos is definitely something that will make things more realistic looking.

Ryff is using cloud-based GPUs to do the rendering and stronger the horsepower, more dynamically render in to a scene gets possible. This is nothing new but have in mind that the product placement is one vertical of applications.

The general vision is to be able to customize and render, almost anything into a scene in real time for millions of users. This is where they get big bucks on reality programs. Whether you like / watch them or not, millions of potential customers do, and they are the ones that the advertising industry wants to target.

Roy also stated that Ryff team believe in GPU roadmap for real time raytracing and that Nvidia has great solutions.

Today, Ryff also announced a strategic partnership with Endemol Shine Group (Amsterdam), the creators of world-class content for all platforms including global hits like Black Mirror, Big Brother, Deal or No Deal, Humans, Hunted, MasterChef, Peaky Blinders, The Island, The Brain, Tin Star and Your Face Sounds Familiar. Ryff is also partnering with digital transformation services leader, Tech Mahindra, for their cloud expertise. Ryff also has another product that can indentify items on the video, also a valuable product.

We encourage you to watch the video below as it will all make sense.

Last modified on 17 September 2018
Rate this item
(0 votes)
Tagged under
More in this category: « Oracle's cloud boss "quit" over spat with Ellison SAP, Microsoft and Adobe team up on data »
back to top