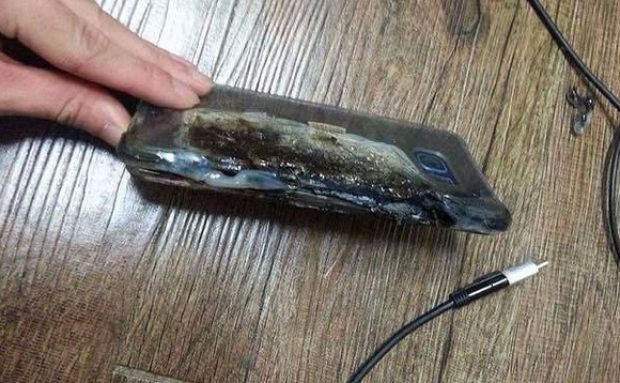 There is nothing the Tame Apple Press loves more than when one of their favourite company’s rivals products catch fire. In this case a bloke in China’s Galaxy Note 7, caught fire and exploded and the way the story has been reported you would think there was something wrong with the product.

The story comes from the Chinese forum Baidu where a bloke called 'Mr. Ni 666666' posted photos of the charred remains of his burned out Galaxy Note 7 smartphone.

The user said his Galaxy Note 7 was plugged in at night when he heard a "sudden bang". He then discovered that his phone had burst into flames. It seems that only his bank account was harmed by the explosion.

The Galaxy Note 7 is doing rather well and demand for the Samsung smartphone is outstripping supply. So this story is getting a lot of traction on sites which feel the need to give Jobs’ Mob a free plug.

Ironically the problem is to do with a plug, or more specifically a cable. For some reason known to only God and 'Mr. Ni 666666' he was using a third-party USB-C adaptor rather than the white cable included in the box with the Galaxy Note 7. After all when you have spent your cash on a nice smartphone the first thing you do is plug it into a USB-C cable which has been made by a bloke in a pub out of bits of twig and Number eight fencing wire.

There is a major problem in China with dodgy third-party USB-C cables. Google engineer Benson Leung discovered that manufacturers of a lot of the cheaper versions can’t handle high currents. Amazon has forbidden them from being sold, but in China it is still a little freer.

Last modified on 24 August 2016
Rate this item
(8 votes)
Tagged under
More in this category: « iPhone 6 and 6S develop touch screen problems Sony unveils a list of Nougat-loving devices »
back to top