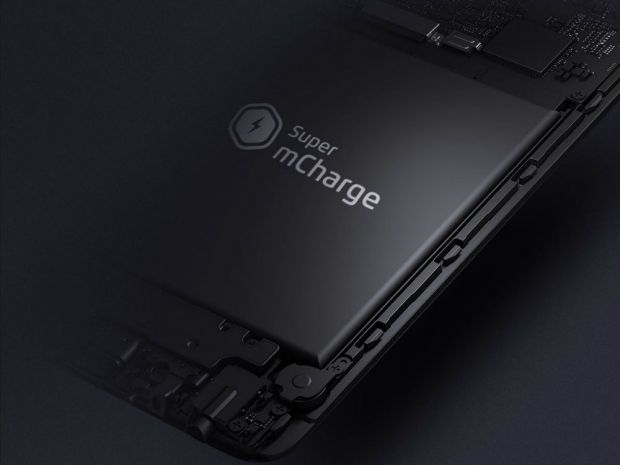 A faster way to charge your battery seems to be a hot topic for many companies. Qualcomm has Quick Charge, MediaTek has Pump Express, Oppo has VOOC and the Huawei Mate 9 with 4000 mAh battery can charge  55 percent in 30 minutes.

Meizu, the company that traditionally uses MediaTek Helio SoCs and a single Exynos now claims that it can charge its phone in 20 minutes. Oppo VOOC promised to charge your phone from zero to 100 last year but in real life testing it took 30 minutes to charge your phone to 68 percent, and the charger gets to an unsafe 65 degrees in the process. Oppo VOOC delivers around 20W while Meizu promises 55W, and this sounds way too optimistic based on everything we know about lithium ion / polymer batteries and charging times.

The technology called Super mCharge should be able to charge your phone within 20 minutes with 55W (11V at 5A max) and even promises that the battery will stay cooler compared to last year’s champion, Quick Charge 3.0. The numbers Meizu quotes should get up to 55W to the supporting Meizu phone within 20 minutes where the temperature won't exceed 38 degrees Celsius, while Quick Charge 3.0 will remain at 18W and get the battery heated up to a still safe 44 degree Celsius. What Meizu is not telling you is that probably, like Oppo, it plans to relocate some charging circuits from the phone to the charger, something that will result in the charger getting really hot.

Meizu claims 98 percent super efficiency in charging and that the company has redesigned the charging cable to support up to 160W, three times the safe margin. The Super mCharge should not damage your battery and the capacity should remain at 80 percent even after 800 complete charge and discharge cycles.

We're a bit skeptical about this. Qualcomm Quick Charge 4.0 should be able to get 28W to your phone safely, and promises a 20 percent speed hike, or 30 percent more efficient charging compared to Quick Charge 3.0.

Huawei, with Mate 9 powered by Kirin 960 SoC according to our own internal testing can charge from 0 to 55 percent in 30 minutes and the 4000 mAh battery will charge to 81 percent in 55 minutes. It was all safe and the charger or the phone didn’t get that hot.

The surprising thing is that Apple doesn’t use any quick charge technology as it takes close to two hours to charge an iPhone 7 (1960 mAh) and more than three hours to charge the iPhone 7 Plus (2900 mAh).

Oppo’s VOOC promises to charge your phone in 15 minutes from 0 to 100 and in real life testing you will be able to charge a turned off Oppo F1 phone with 2500 mAh battery from zero to 68 percent in 30 minutes. This is definitely not as fast as the company promised last year and the VOOC charger gets to around 65 degrees Celsius, which is a far cry from a safe temperature.

Testing of this claim should not be a problem, as soon as Meizu ships a phone supporting this technology, but it seems that won't be until some point in 2018 when it claims the Super mCharge will ship. The last 20 percent of the battery charges as slow as the first eighty percent - this has always been the case and as far as we know it cannot be overcome with any existing battery technology. Meizu does mention the "advanced manufacturing processes" for the battery, but again this sounds way too optimistic.

Last modified on 06 March 2017
Rate this item
(0 votes)
Tagged under
More in this category: « Intel confirms XMM 7480 for this year Boffins turn all stolen phones into a Samsung Note 7 »
back to top