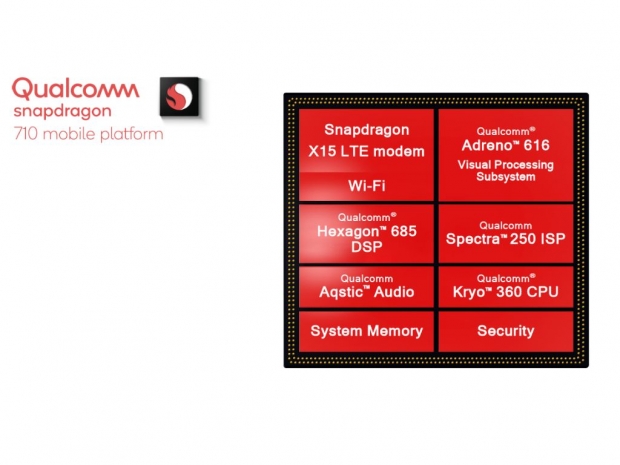 Focus on AI and bringing high end features to mainstream

Qualcomm has officially announced its newest Snapdragon 710 SoC at the Qualcomm AI Day in Beijing, China, bringing up to 2x the performance of the previous generation Snapdragon 660 SoC, with a big focus on AI, as well as offering some of the premium features from the high-end Snapdragon 845 SoC.

The Qualcomm Snapdragon 710 SoC is based on the 2+6 CPU core configuration with two Kryo 360 Gold performance cores clocked at up to 2.2GHz and six efficiency-oriented Kryo 360 Silver cores clocked at 1.7GHz. It also features the Adreno 616 GPU, Hexagon 685 DSP and Spectra 250 ISP, as well as Snapdragon X15 LTE modem, and Qualcomm Aqstic Audio. 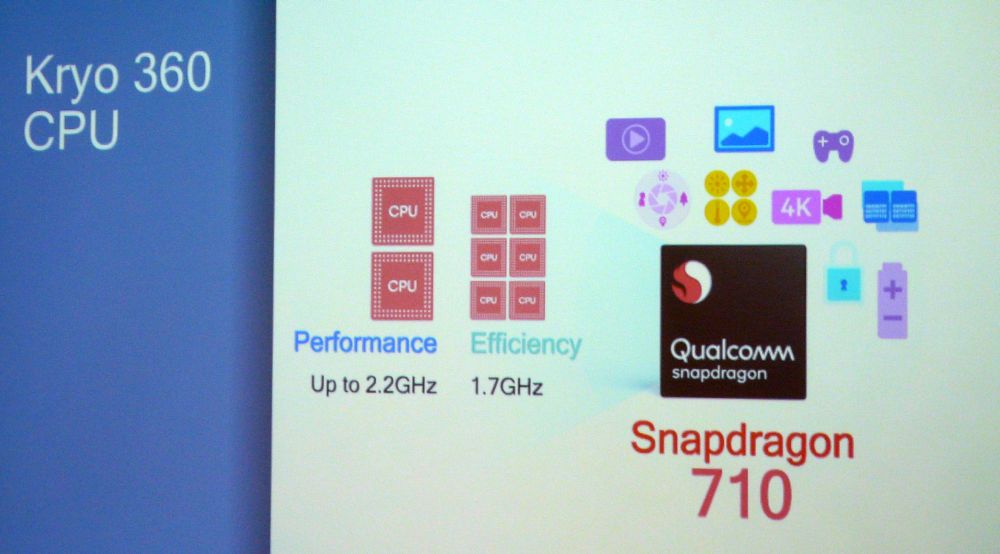 As far as the CPU goes, these are the well known 300-series Kryo cores seen on the high-end Snapdragon 845 SoC, but more importantly, these come with a new memory system with dedicated L1 and L2 cache and shared L3 cache. The Adreno 616 GPU also packs quite a punch promising up to 35 percent faster graphics rendering compared to the previous generation.

In addition to performance improvements, the Adreno 616 GPU allows the Snapdragon 710 to support up to QHD+ (3360x1440) resolution displays with HDR10 support as well as 4K HDR video playback, which has been reserved for high-end SoCs.

The Qualcomm Spectra 250 image sensor processor (ISP), which will bring support for 20-megapixel dual ISP or a 32-megapixel single ISP. It will support UHD/4K video capture at 30fps and, thanks to the new AI engine, brings plenty of enhancement unavailable for the previous generation.

Some of the key features include noise reduction with HW accelerated multi-frame feature where it snaps multiple frames and takes the best parts of each frame to produce the best possible picture, even in low-light scenarios. It also has Active Depth Sensing, can shoot UHD videos at 40 percent lower power, Slow Motion Video capture, Video Noise Reduction with motion compensation filter and supports HW-accelerated Super Resolution, as well as hardware-accelerated Super Resolution and Image Stabilization.

The big update is also the new Snapdragon X15 LTE modem, which is around 30 percent faster compared to the one on the Snapdragon 660 SoC. This is a Cat 15 LTE modem with support for 800Mbps DL and comes with other improvements like the 4x4 MIMO and License-Assisted Access (LAA). The rest of the connectivity includes 2x2 802.11ac WiFi, Bluetooth 5, Qualcomm TrueWireless Stereo Plus and Broadcast Audio.

In terms of numbers, Qualcomm is promising up to 2.5x faster downlink compare to the Cat 7 LTE in real-world use as well as support for 4K video streaming, and faster browsing download speed with a weaker signal, thanks to the 4x4 MIMO design. 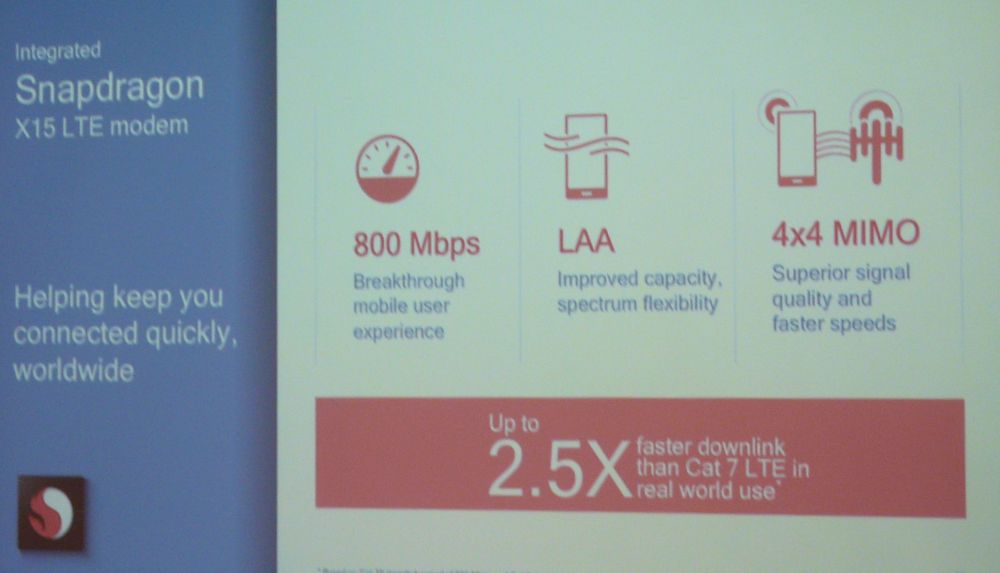 When it comes to performance and power advancements, Qualcomm expects up to a 20 percent overall uplift in performance, with up to 25 percent faster web browsing and up to 15 percent faster app launch, at least compared to the SD 660. It also comes with higher power efficiency with up to 40 percent lower consumption in video playback and gaming, and up to 20 percent in video streaming, compared again to the Snapdragon 660.

As noted, there is a big focus on artificial intelligence and the new AI Engine with the Snapdragon 710, and, according to Qualcomm, you can expect up to 2x overall performance improvements in AI application compared to the Snapdragon 660. What makes the Qualcomm AI Engine special is that it isn't a single NPU solution but rather a heterogeneous computing solution which works with all processors, the Hexagon DSP, Adreno GPU, Kryo CPU and Spectra ISP to provide enhanced on-device AI application performance. 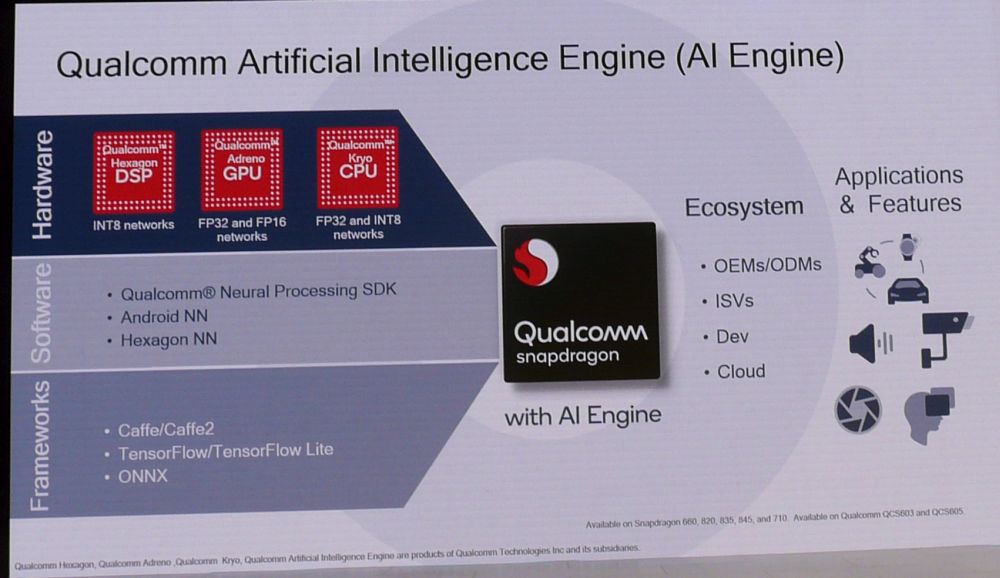 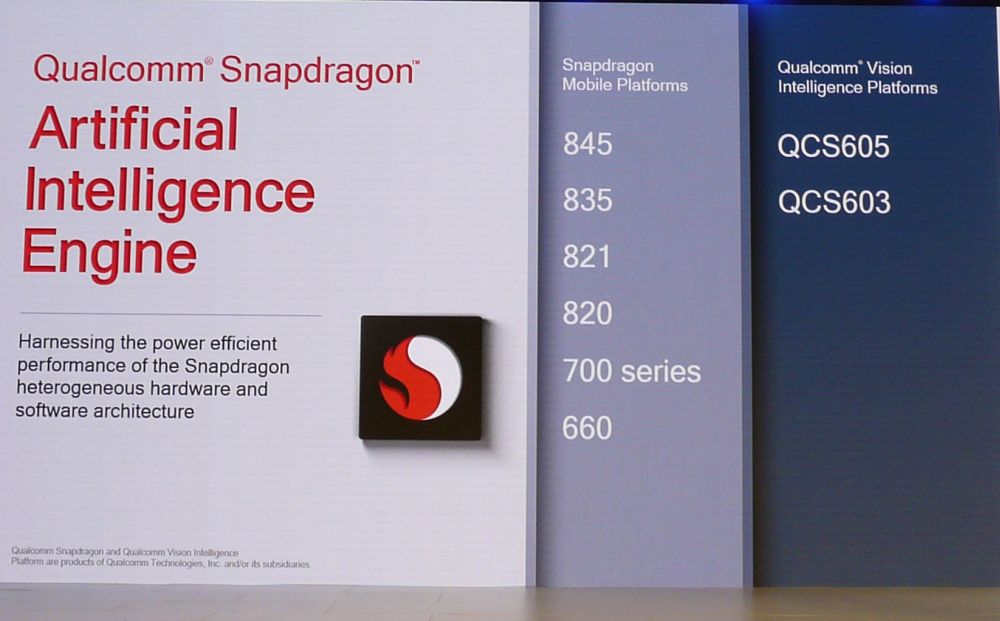 While Qualcomm is not commenting on any specific design wins, the company representatives did say that there is a big interest for the Snapdragon 710 SoC and we could see the first smartphones in this quarter. 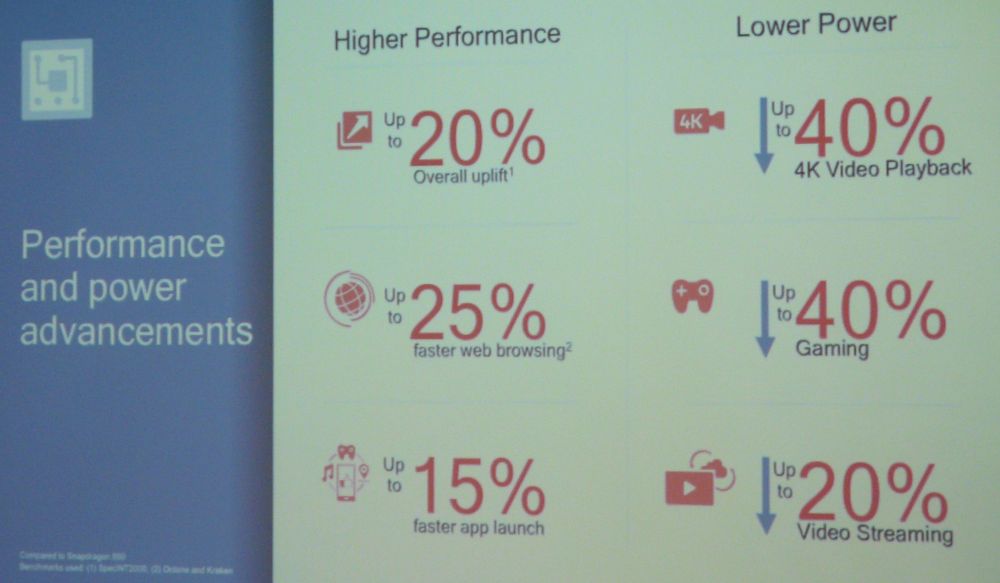 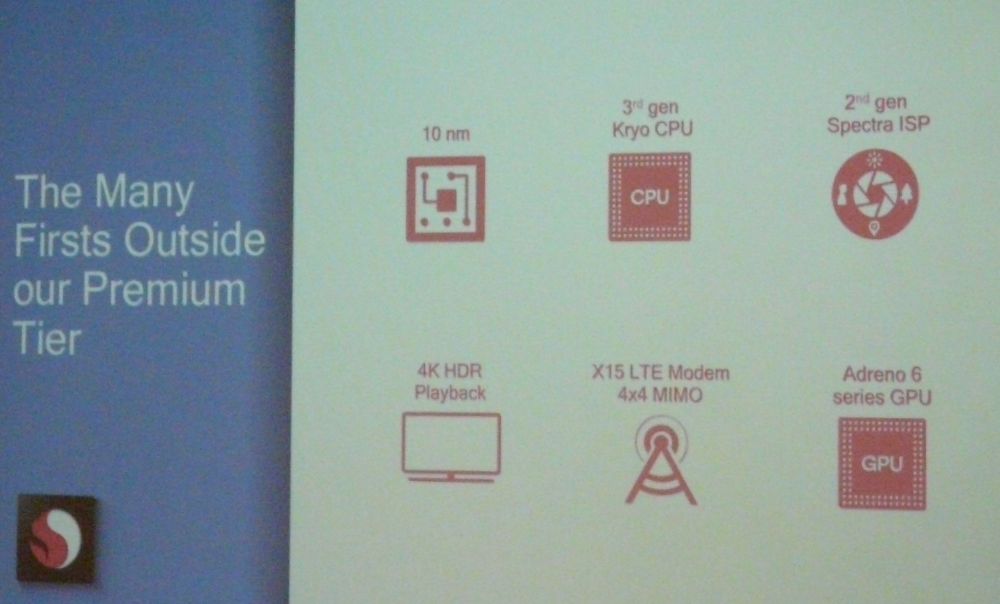 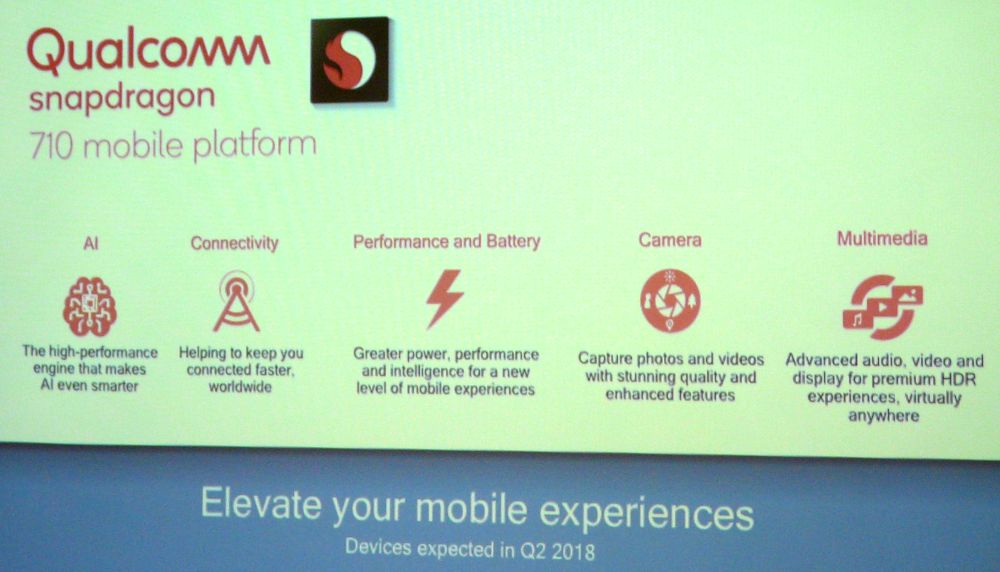 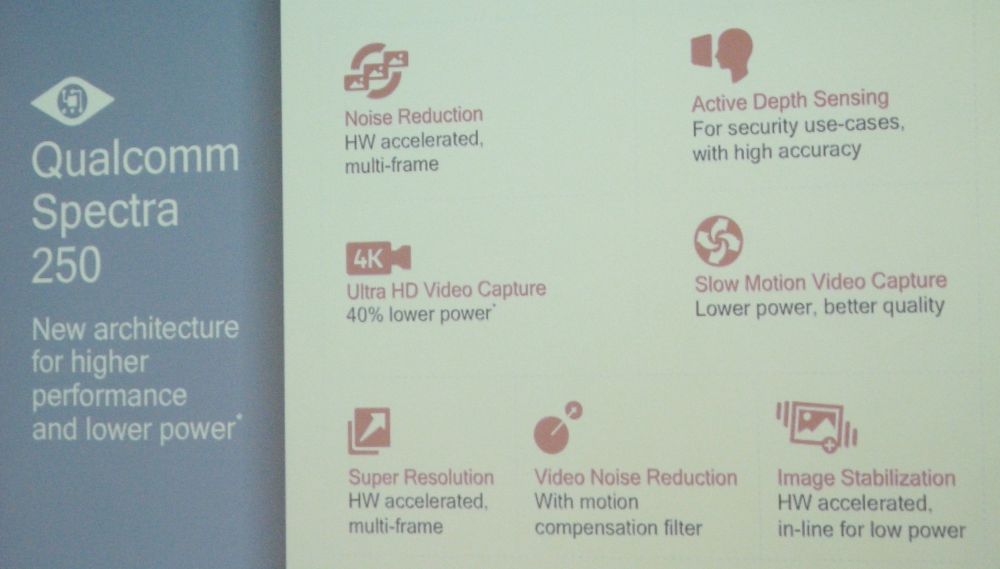 Last modified on 24 May 2018
Rate this item
(0 votes)
Tagged under
More in this category: « Mediatek announces new Helio P22 SoC ZTE named and shamed as shipping with malware »
back to top