Microsoft goes cheap on the Surface 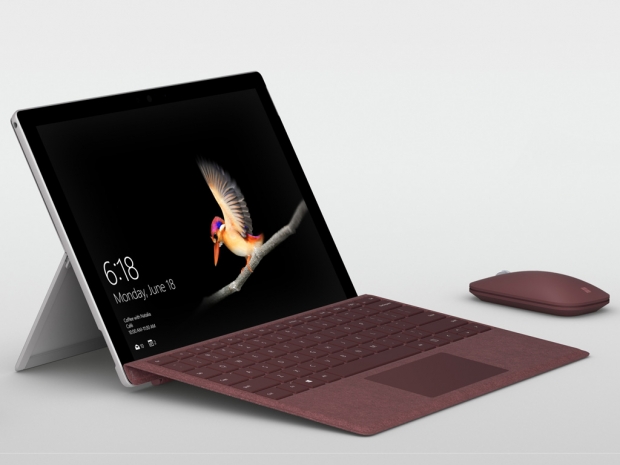 After an endless line of earlier well-leaked rumors, Microsoft said its cheapest Surface to date,  the $399  Surface Go, is up for grabs. The new model is both smaller and lighter, as well as comes with apparently surprisingly decent hardware specifications.

Microsoft claims the Surface Go is both the thinnest and lightest Surface, measuring 245x175x8.3mm and tipping the scales at 521g (1.15lbs). Although this is the cheapest Surface in the lineup, Microsoft spent a lot on the PixelSense screen and although it is a 10-incher, it has a decent 1800x1200 resolution, which adds up to 216 ppi of pixel density, and has a 1500:1 contrast ratio. The display is a 10-point multi-touch with support for Surface Pen and  protected by Corning Gorilla Glass 3.

Surface Go will be available in a couple of different versions, all powered by Intel Pentium Gold 4415Y CPU. This is a dual-core processor based on the Kaby Lake architecture, with support for hyperthreading, and a 1.6GHz base clock. It also comes with Intel's HD Graphics 615 IGP with 24 Execution Units (EUs) and boosts up to 850MHz, which is not bad considering the 6W TDP of the CPU.

The base version of the Surface Go will come with 4GB of LPDDR3-1866 memory and 64GB of eMMC storage. Other versions - which cost more - will come with 8GB of RAM and 128GB or 256GB NVMe SSD, likely to improve storage performance significantly.

You get 802.11ac WiFi and Bluetooth 4.1 for connecting. Microsoft is working on an LTE model that will be arriving later this year, and we suspect this will be based on Qualcomm's Snapdragon modem.

The  Surface Go will come with Windows 10 in S mode as well as a 30-day trial of Microsoft Office 365 Home, while the Windows 10 Pro version will add an additional  $50 to the price.

Microsoft also unveiled the  Surface Go Signature Type Cover which, it claims, will offer the best possible typing experience with an ergonomic key pitch and key travel, as well as the Windows PRecision Trackpad with five-point multi-finger gestures. The built-in kickstand uses a full friction hinge which extends to 165 degrees allowing to be used in the so-called studio mode.

Both the Surface Go Signature Type Cover, coming in Burgundy and Platinum colors, and Surface Pen are optional accessories and can be pre-order/ordered for $130 and $100, respectively.

Available for pre-order as of July 10 in select markets

According to Microsoft's pre-order page, the Surface Go starts at $400 for the for the base 4GB/64GB version, while the 8GB/128GB version sells for $550. Both the base and the upgraded version are currently listed to be available on August 2nd.

Last modified on 10 July 2018
Rate this item
(0 votes)
Tagged under
More in this category: « Xiaomi finally IPOs at $50B+ Apple's China appeasement broke the iPhone »
back to top