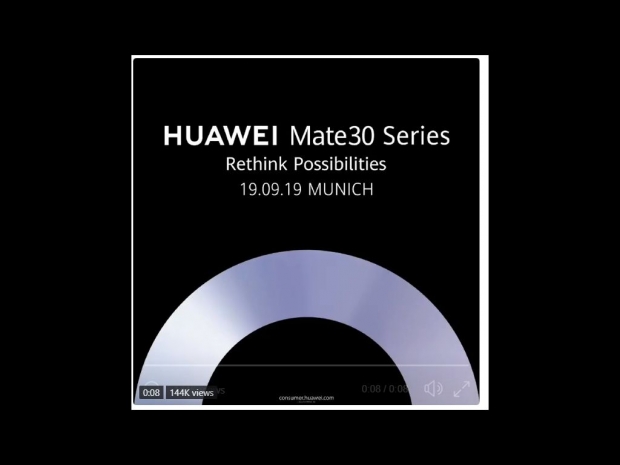 Huawei Mate 30 will come earlier than most expected. The company has sent out invitations for a global launch on September 19, just slightly more than two weeks from now.

The global launch in Munich will end the speculations about the possible google Play Store and apps presence as it will all be known rather soon. Huawei is expected to introduce Kirin 990, its second-generation 7nm SoC, most likely based on the new Cortex A77 CPU / Cortex A55 combo and a new ARM-based Mali G77 GPU. Huawei is expected to boost the picture quality as well as the AI features of the phones. After all, P30 Pro has one of the best cameras and bokeh we've ever tried.

A lot of pictures of phone designed and the tweeter video might be teasing the round-shaped camera module at the back. Other rumors include 6.7 inch OLED screen, 55W charging, and a 40-megapixel camera, last least one of the few it will have.

It is unlikely that the phone comes without Android and Play Store support, for what it is worth, this might be one of the newest and highest end phones to launch with Android 10 out of the box.

Did you get it right? The countdown to #HuaweiMate30 starts now!
We're going full circle in Munich on 19.09.2019.
Join us live: https://t.co/9ugi5gG9ci#RethinkPossibilities pic.twitter.com/etRYjrBVEC