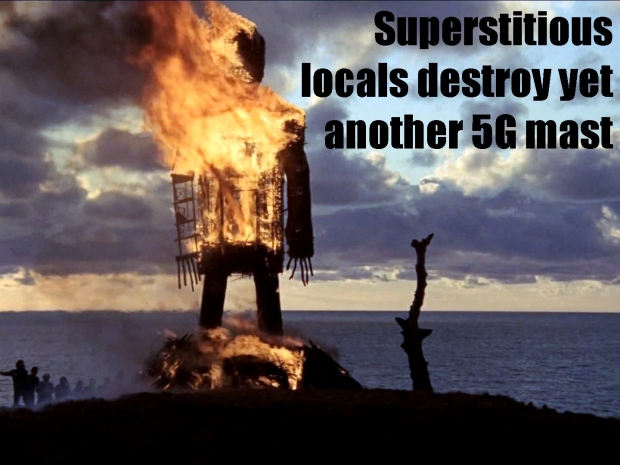 Unidentified government behind it

The daft conspiracy theory linking 5G technology is part of a coordinated disinformation campaign being created by an unknown state government.

Marc Owen Jones, a researcher at Hamad bin Khalifa University in Qatar, who specialises in online disinformation networks, analysed 22,000 recent interactions on Twitter mentioning “5G” and “corona” and said he found a large number of accounts displaying what he termed “inauthentic activity”.

He said that there are strong signs that some of these accounts are a disinformation operation.

Jones said the campaign uses a strategy similar to Russia’s Internet Research Agency, which was behind a disinformation campaign during the 2016 US presidential campaign. But he said he hasn’t yet concluded that Russia, or any other government or organisation, is behind the effort.

Blackbird.AI, a New York-based company that monitors online disinformation campaigns, said it had in recent weeks identified a surge in the number of social media posts promoting the 5G conspiracy theory.

In the previous 24 hours, there had been more than 50,000 posts about the topic on Twitter and Reddit, Naushad UzZaman, the company’s chief technology officer and co-founder, said on Wednesday.

There has been a “significant uptick in inauthentic amplification” of posts on social media linking 5G to the coronavirus, UzZaman said, indicating that there could be a coordinated campaign and bot accounts involved.

The company says it uses a system that analyses language, communication patterns, post volumes and bot activity in order to identify social media posts that are “inauthentic” and attempting to manipulate online discussion.

Blackbird.AI hasn’t determined who is behind the effort, nor have the researchers at the Global Disinformation Index, a non-profit that tracks disinformation online.

Ali Tehrani, founder and chief executive officer of Astroscreen, a London-based company that monitors social media manipulation, said there was a concerted effort by suspicious accounts to amplify the 5G conspiracy theory on social media, which was mixed with a much larger number of genuine accounts circulating the claims.

“We’ve seen accounts that you could say are inauthentic and coordinated promoting the 5G conspiracy, but I think the bigger problem right now is high-profile individuals spreading misleading information”, he said.

Conspiracy theories about health risks associated with 5G have circulated since at least 2016. They were first spread on internet forums and YouTube, and were later picked up by the website InfoWars and Russian state broadcaster RT, which published stories cautioning that 5G could be “a global catastrophe,” causing cancer in humans and wildlife.

The claims may have originated with comments made by a doctor in Belgium, saying he believed 5G was “life-threatening” and connected to the coronavirus, while noting that he had “not done a fact-check”.

The newspaper that printed his comments retracted the story, but that didn’t stop the conspiracy theory from gaining traction.

One of the biggest problems is the 21st century belief that because someone sings a song, or pretends to be someone else in movies, we have to take what they say seriously.

Some celebrities including the popular beat combo artist M.I.A. and the actor John Cusack posting suggestions on social media that 5G is linked to the spread of the virus or otherwise poses health risks.

Meanwhile, users of online forums such as 4chan have encouraged people to vandalise 5G equipment.

Fortunately for the spread of the technology, idiots who believe such theories are not very good at identifying 5G equipment and have just been burning random 4G towers.

One thing we have noticed about “5G conspiracy experts” on Facebook is that they often claim to work for telcoms companies and yet have an inability to explain the technology, or if they do, they use a lot of technology buzzwords incorrectly. It might be true that they work in telcoms companies but with intellect like that they must be in the cleaning, or billing departments.