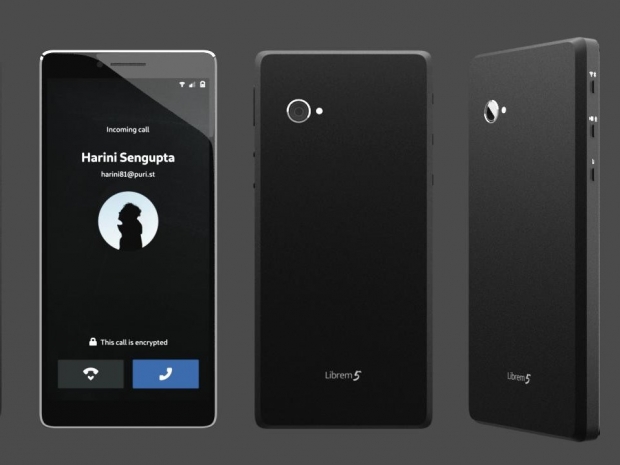 For those who came in late, the Librem 5 is a general-purpose computer in a phone form-factor that Purism has designed and built from scratch following a successful crowdfunding campaign that raised over $2.2 million. Both the hardware and software design is focused on respecting the end user’s freedom and giving them control over their privacy and security.

The Librem 5 doesn’t run Android but instead runs the same PureOS operating system as Purism’s laptops and mini PC.

The Librem 5 has unique hardware features, including a user-removable mobile modem, WiFi card, and battery. Like Librem laptops, the Librem 5 also features external hardware kill switches that cut power to the cellular modem,

WiFi/Bluetooth, and front and back cameras and microphone can be controlled when these devices are in use. Hardware switches can be triggered together to enable “lockdown mode” which also disables the GPS, accelerometer and all other sensors.

Librem 5 can be connected to a monitor or laptop dock and use it as a desktop computer running the same full-sized desktop applications as on Librem laptops. When in a phone form-factor, applications behave much like “responsive websites” and change their appearance for the smaller screen. This allows you to use the Librem 5 as a phone, a desktop, or a laptop with the same applications and same files.

Purism’s founder and CEO Todd Weaver said that shipping the Librem 5 had been an immense multi-year developmental effort.

“It is the culmination of people’s desire to see an alternative to Android and fund it, coupled with dedication from a team of experts addressing hardware, kernel, operating system, and applications have turned a lofty near-impossible goal into reality. We have built a strong foundation, and with the continued support of customers, the community, and developers, we will continue to deliver revolutionary products like the Librem 5 running PureOS.”

Last modified on 23 November 2020
Rate this item
(1 Vote)
Tagged under
More in this category: « Realme managed to sell 8.3 million devices during Festive Days sale Apple’s Big Sur has a huge security hole »
back to top