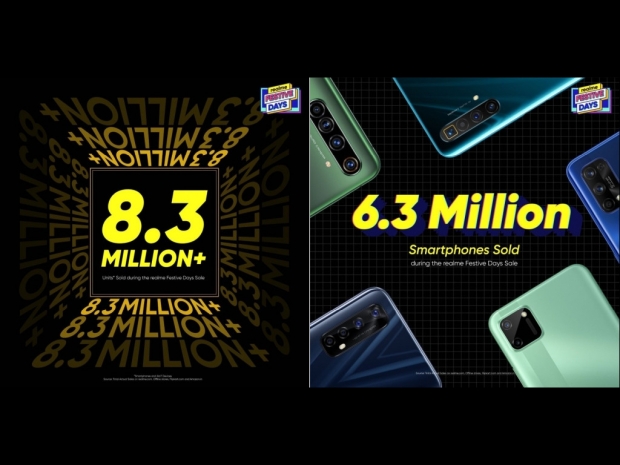 Realme has announced it managed to flog a total of 8.3 million devices during the Festive Days sale in India, of which 6.3 million were smartphones.

Realme has been pushing quite hard into a lot of markets, including wearables, smart TVs, and other smart devices, and has recently announced the new Watch S that should be coming to the market soon.

With this in mind, it comes as no surprise that the company managed to break a previous record by selling over 8.3 million devices and over 6.3 million smartphones during the Festive Days sale in India.

Realme has previously announced a big sale for the Festive Days back in October with big discounts, which led to those big sales numbers.

The company is launching a new smartphone for global market, the Realme 7 5G, which should be a rebranded Realme V5 5G, packing a 6.5" FullHD+ 90Hz screen, Mediatek Dimensity 720 SoC, 48MP quad rear camera, 16MP front camera, and a 5,000mAh battery.

Last modified on 19 November 2020
Rate this item
(0 votes)
Tagged under
More in this category: « Xiaomi Mi 11 Pro to come with QHD+ 120Hz screen Purism ships mass-produced Librem 5 »
back to top