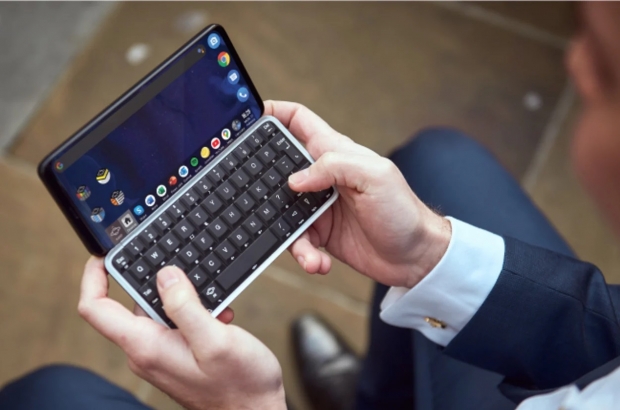 Planet Computer has released its final specification for the Astro Slide – the first 5G device in the world to feature a full physical keyboard. Astro Slide 5G transforms from a traditional smartphone form-factor into a fully functioning micro-computer, with a keyboard that slides out.

Astro Slide enables users to type notes, long emails, and blog posts as well as easily create and edit spreadsheets – all from a powerful, pocketable smartphone with the tactile feedback that only a physical keyboard provides. By separating the screen from the keyboard, users can type to their heart’s content without obscuring the large touchscreen.

The outfit claims it is the first 5G ‘transformer’ device to offer all the benefits of a smartphone and a pocket computer in one.

Under the bonnet is an eight core 5G processor, 8GB of RAM and 128GB of internal memory, supplemented by a mini-SD card slot.

It is supposed to be able to multi-task between work, entertainment, and web browsing. There is a 48-megapixel rear camera and a 13-megapixel front facing camera for video conferencing and selfies,.

Dr Janko Mrsic-Flogel, CEO of Planet Computers, said: “Astro Slide delivers a no-compromise 5G device for people that create content on the move. Powerful enough to run complex work projects and with a keyboard that you can type on for hours, the Astro Slide will still fit into your pocket and weighs less than 300 grams.”

It runs on Android 11 and can be set up to run Linux alongside Android. The USB-C port enables users to connect Astro Slide to an external display via HDMI or multiple peripherals via the Planet USB-C hub.

It has a 4,000 mAh lithium-ion battery which also features 10 watt wireless charging as well as MediaTek’s 5G Power Saving technology. It also features a fingerprint sensor, NFC, GPS and Bluetooth. The Planet Computers’ keyboard is available in 24 different keyboard layouts including Arabic, Chinese, Japanese and both UK and US English, as well as a wide range of European keyboards.

Astro Slide will be available globally in the Summer of 2021 although there is no word on the price yet but 819 Euro has been touted on Indiegogo.

Last modified on 19 January 2021
Rate this item
(2 votes)
Tagged under
More in this category: « Industry responds to Qualcomm Nuvia acquisition Apple set to ditch iPhone Lightning port »
back to top