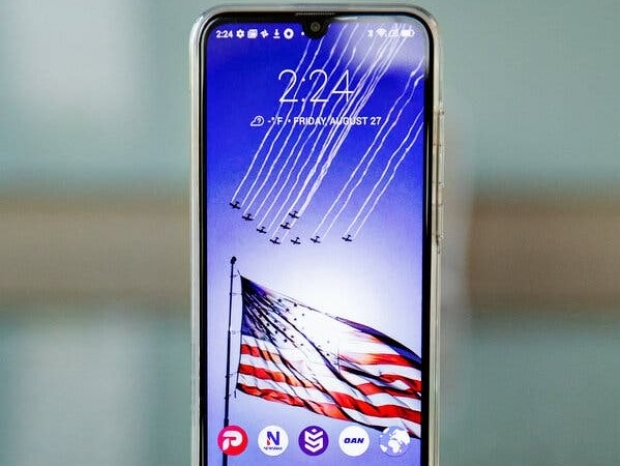 A 22 year old Bitcoin millionaire’s plan to build a phone just for US conservatives that had nothing to do with the evil Google and Apple appears to have backfired.

Erik Finman, who made all his cash on Bitcoin, wanted Republicans to ditch phones made by the “liberal” tech companies of Apple and Google. The “freedom phone” would liberate Americans from their "Big Tech overlords".

According to Apple fanzine The New York Times , he made a splashy video, with stirring music, American flags and references to former Presidents Abraham Lincoln and Donald J. Trump. The phone got a lot of attention from Conservative pundits who hawked Finman's Freedom Phone, and his video amassed 1.8 million views.

Finman had thousands of orders for the $500 device and then had to deliver the phone before the duelling banjos of his customers stopped playing.

His first plan to put his software on a cheap Chinese phone had the snot kicked out of it by the Tame Apple Press which did not take the idea of having its idea of marketing phones to stupid people taken away from it.

Finman pressed ahead with a business model based on the fact that his conservative customers' hated Silicon Valley even more than allowing women to have control over their bodies.

Then it started to go south. He found that he firstly had to rely on Google. The company's Android software already works with millions of apps, and Google makes a free, open version of the software for developers to modify.

Finman hired engineers to strip it of any sign of Google and load it with apps from conservative social networks and news outlets. Then he uploaded the software on phones he bought from China. What could go wrong?

For a start the Freedom Phone was based on a low-cost handset from Umidigi, a Chinese manufacturer that had used chips shown to be vulnerable to hacks. Finman countered that he was 100 percent sure that the phone was “more secure than the latest iPhone”. This does not appear a particularly high bar, but even in this case Apple has tens of thousands of engineers while Finman employed 15 people in Utah and Idaho.

Within a month of the phone’s release, Finman decided it would be a wizard idea to sell someone else’s phone and act as the branding frontman. Just Trump, sold Trump steaks and Trump vodka without running a cattle ranch or a distillery.

He teamed up with a 13 year old Utah firm called ClearCellular, which had already created a phone that was disconnected from Apple and Google. The company also had experience with logistics, shipping and customer service.

The companies added the American Flag wallpapers and conservative apps to ClearCellular’s device and called it the Freedom Phone. Finman said that the phone also has his “PatriApp Store”, though ClearCellular provides the technological support for the app store.

The new phone is getting the sort of reviews you would expect for a $500 device that is nearly as good as a $200 budget Android phone.

But of course to the phone’s target audience that was just proof how corrupt the tech industry is and Finman said he had orders for about 12,000 Freedom Phones, putting revenue at around $6 million in just over seven weeks.

Finman said there were about 8,000 phones left to ship although mysteriously there have been few customers who appear to have gone on record for buying one.

He said that during elections, he planned to make the Freedom Phone direct users to nearby polling stations. And he aimed to create a news feed on the phone where he could promote conservative articles.

“I see it absolutely as one of the ultimate political tools. Everyone has one in their pocket.”