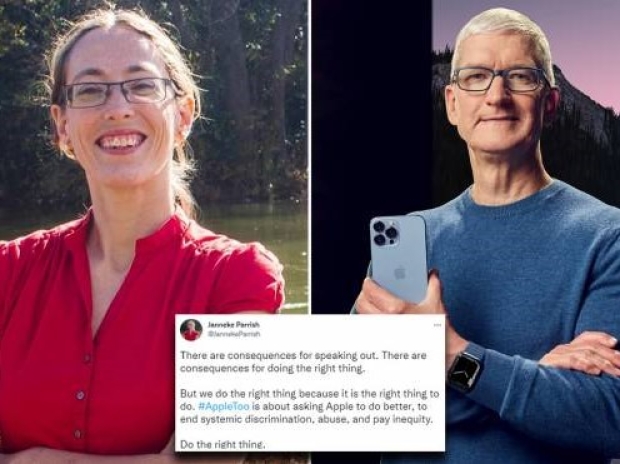 Claimed she had deleted material on her computer

An Apple employee who led fellow workers in publicly sharing instances of harassment and discrimination has been fired.

Janneke Parrish, an Apple programme manager, said the iPhone maker fired her for deleting material on company equipment while under investigation over the leaking of a company town hall to media.

Parrish said she deleted apps that contained details of her finances and other personal information before handing her devices into Apple as part of the probe.

However, the probe appeared to be more about her activism in the workplace, which covered Apple’s abuses of pay equity and workplace conditions, she said.

Apple is experiencing considerable unrest from its employees who have been daring to make complaints with the National Labour Relations Board. While it is still the US, law protects the right of employees to openly discuss certain topics, including working conditions, discrimination, and equal pay.

Jobs' Mob's management were somewhat shocked when during the summer, current and former Apple employees began detailing on social media what they said were experiences of harassment and discrimination.

Parrish and some colleagues began publishing the stories on social media and a publishing platform in a weekly digest titled ‘#AppleToo’.

Parrish said she was careful to respect company rules and never shared information that she believed to be confidential. She said she continued to publish the ‘# AppleToo’ digest after coming under investigation at the end of September.

“If anything, it’s made the importance of that work clearer than ever, when Apple’s response to criticism is to start internal investigations into those that it wants to see gone”, she said. “It’s easier for them to terminate people than it is for them to listen.”

Last modified on 18 October 2021
Rate this item
(2 votes)
Tagged under
More in this category: « Mobvoi rolls out TicWatch Pro 3 Ultra smartwatch Apple unveils the M1 Pro and M1 Max SoCs »
back to top